Investigators are combing through the wreckage at the scene of a deadly plane crash in Pakistan that occurred early Friday morning. An Airbus jet with nearly 100 people on board went down in a residential neighborhood in the city of Karachi — and at least two survived.

It was a scene of horror as the Airbus, caught on security camera, crashed into the neighborhood. Rescuers found bank president Zafar Masood in the wreckage. Masood only suffered fractures. 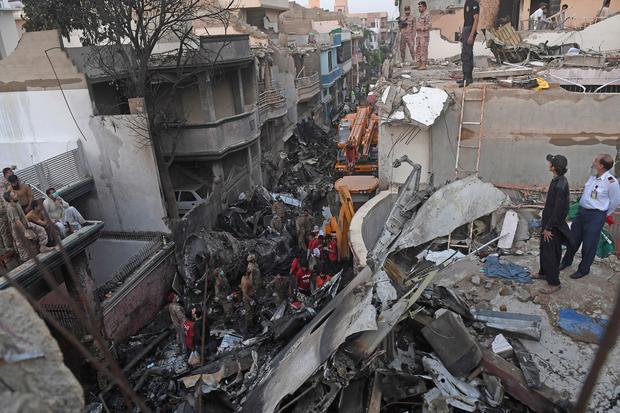 Security personnel search for victims in the wreckage of a Pakistan International Airlines aircraft after it crashed in a residential area in Karachi on May 22, 2020. Asif Hassan/Getty Images


Aviation Authorities say the A320 aircraft, carrying 98 people, took off from Lahore and was about to land in Karachi when it lost both engines.

The country had only just resumed domestic flights after weeks of a coronavirus lockdown. Prime Minister Imran Khan is promising a "full investigation."

Can You Correctly Identify All 14 Of These...