Berlin — The Austrian ski resort of Ischgl is a renowned winter party spot for the European ski set. But its famous après-ski party scene may have helped make it one of Europe's most concentrated clusters of coronavirus infections. Hundreds of people have joined a class action lawsuit against Austrian authorities, claiming they waited too long to lock the resort down, allowing COVID-19 to spread with deadly consequences. 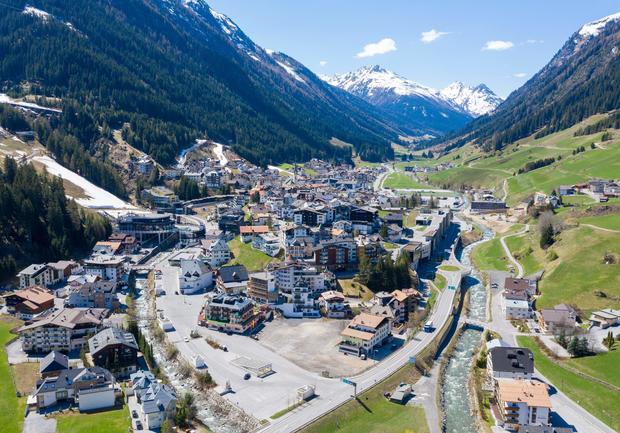 An aerial view of the village of Ischgl, a tourism hotspot, after a quarantine was ordered for western Tyrol, Austria's worst hit region by the new coronavirus pandemic, was lifted, April 23, 2020. JOHANN GRODER/EXPA/AFP/Getty


With a permanent population of only about 1,500, Ischgl is tiny, but every winter some 10,000 visitors flock into the town every week to enjoy its alpine scenery and sports. That influx also brings in seasonal workers from across Europe to staff the restaurants and bars that give the town its famous party vibe. A Swiss woman working at one of Ischgl's bars is believed to have brought the coronavirus to the town as early as February 5.

While she only tested positive for the virus much later, the Austrian Agency for Health and Food Safety has labelled her "Patient Zero." From that single case, the disease appears to have spread fast.

A study by the Medical University of Innsbruck found that 42% of Ischgl's residents carry antibodies of the novel coronavirus indicating previous infections. That's the highest infection rate ever recorded in a measured population worldwide, according to Dorothee von Laer, director of the university's virology institute.

About 80% of Ischgl's population took part in the study: 1,473 blood samples were examined between April 21 and April 27, and von Laer said a three-step procedure ensured the antibody tests were 100% accurate, "so there are no false-positive results."

By comparison: In the town of Gangelt, which became one of neighboring Germany's first COVID-19 hotspots, about 15% of residents caught the virus, according to a study carried out at the beginning of April.

Despite the unusually high infection rate in Ischgl, however, there were still very few people who developed serious symptoms, which may have helped hide the outbreak in the early days of the pandemic — and helped it spread among the town's residents and visitors.

Von Laer has said that most people who had the virus in the village may never even have known about it: "85% have gone through the infection unnoticed," she said.

The study has also led the researchers who compiled it to suspect the coronavirus started spreading in Ischgl as early as mid-February. And given the nature of the tourist town, the virus didn't stay put. Separate research carried out by Austria's public broadcaster ORF found that more than 11,000 EU citizens caught the virus in Austria, mostly at Ischgl and surrounding ski resorts.

Peter Kolba, a lawyer who heads an independent consumer protection organization, has launched a class action lawsuit arguing that Austrian officials at the federal level and in the state of Tyrol, where Ischgl is located. He told CBS News that officials waited far too long to implement restrictions to limit the spread of the virus.

"The study proves that SARS-CoV-2 [the novel coronavirus] had spread in Ischgl already in February, as there were mass infections among tourists and also among locals," Kolba said. "Already on March 3 the authorities were informed that members of a tourist group from Iceland had tested positive for coronavirus after skiing in Ischgl."

Kolba represents about 1,000 plaintiffs — including 48 Americans — in the class action suit. They are demanding as-yet undetermined financial compensation from the Austrian federal government for failing to act sooner. 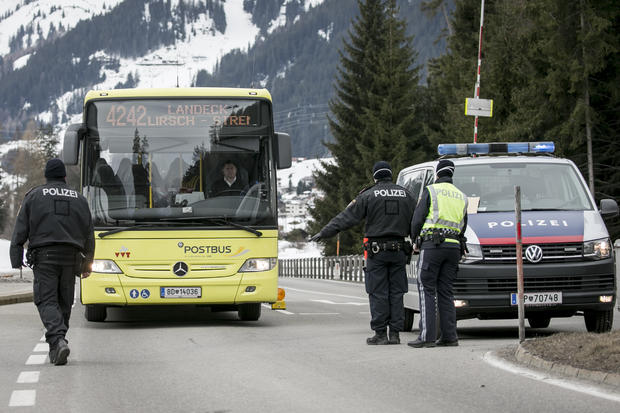 Police at a roadblock stop a bus from driving out of Sankt Anton following the imposition of a quarantine due to a coronavirus outbreak, March 14, 2020, near Landeck, Austria. The ski resort towns of Sankt Anton and Ischgl were both put under quarantine and many ski resorts in the region were closed. Jan Hetfleisch/Getty


Regional officials did impose a lockdown on 13 March — "too late," according to Johann Friedrich, one of the vacationers being represented by Kolba. The 68-year-old Austrian went on a week-long ski trip to Ischgl with three of his friends that was meant to end on March 14. He shared a room with his friend, Hannes Schopf, 72, who later died of COVID-19.

"If they had closed the resort a week earlier, my friend would still be alive," Friedrich told CBS News.

"Hannes always wanted to ski in Ischgl," he said. "It's so heartbreaking, the scale of mismanagement is devastating. Greed is to blame for this. The people in Tyrol knew what was going on, but yet nobody told us. The hotels and restaurants and ski lifts wanted to keep their customers. They should have closed the place earlier."

When the lockdown orders forced the group to leave Ischgl a day earlier than planned, they piled onto municipal buses for the trip out of the valley. "The buses were packed with people, the whole village was cramped," Friedrich recalled.

Kolba is adamant: "The scale of the outbreak could have been minimized" if action had been taken sooner.

Are the wheels coming off in Atlanta?