In Mexico City, the dead usually lay peacefully for decades in public cemeteries. Now, laws limiting burial rights – specifically the length of time a body can be buried – are being enforced around parts of the country because cemeteries are running out of room for the dead.

It's a widespread issue related to the coronavirus pandemic and is complicated by an overcrowded system, according to photojournalist Jonathan Alpeyrie, who has been covering the pandemic in Mexico and spoke to CBSN from Mexico City.

He said municipal cemeteries are exhuming bodies in order to make room for the recently deceased.

"There are no longer spaces to not only accommodate people who are dying from natural causes or violence or cancer or whatever it might be in a regular time," said Alpeyrie. "But now that you have the coronavirus it adds an extra layer, which stretches the system to its limits." 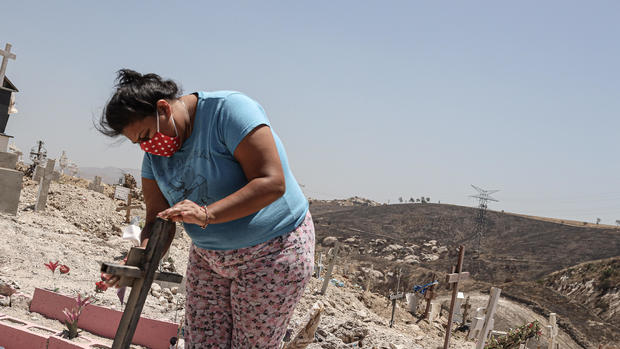 
Alpeyrie, who has covered conflict in countries including Afghanistan and Ukraine and was kidnapped in Syria in 2013 and held captive for 81 days, said coffins and corpses are being removed. If families don't claim a body, it is cremated and replaced with a new one, he said.

This is taking place as coronavirus cases in the country continue to climb. This week, Mexico broke several single-day records in its number of new confirmed cases. The official death toll is now more than 34,000, according to data from Johns Hopkins University. But Alpeyrie said a lot of deaths due to COVID-19 are unreported.

"A lot of family members in Mexico do not want the authorities to know that their family members died of the virus because usually bodies are cremated as soon as this is found out," he said.

In Mexico, it is customary to bury bodies, a choice that's made for religious reasons in a country that's more than 90% Catholic.

Until the numbers improve, local governments have to try to anticipate the need for space, says Alpeyrie. So cemetery tenures in some areas – laws that allow bodies to be removed after a certain number of years – will have to be enforced.

"There are enough deaths in Mexico that are putting a heavy strain on the cemeteries and crematoriums in major cities throughout Mexico that they do have to resort to using this law in order to make room, and we have seen this firsthand, and it's quite- it's quite difficult to watch," he said.

How Frequently You Eat These Foods Will...