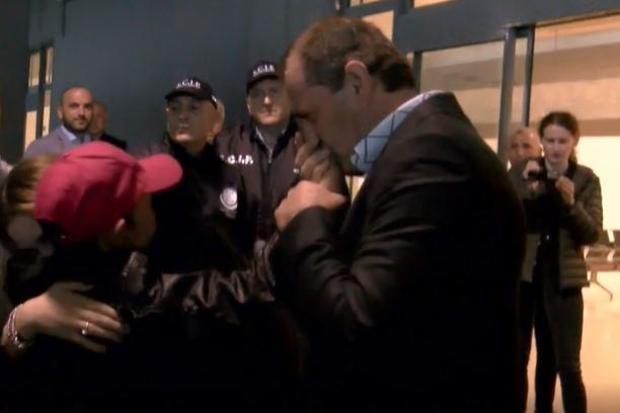 Alvin Berisha, in the red hat, is reunited with his father and hugged by one of his sisters at Rome's Fiumicino airport on November 8, 2019, about five years after his mother brought him to Syria when she joined the ISIS terror group. Italian State Police


Rome — An Albanian boy taken by his mother to Syria five years ago when she joined ISIS was reunited on Friday with his father and sisters in Italy. Alvin Berisha's father Afrim had been searching for his son since 2014, when his radicalized wife abandoned Italy and the rest of her family to fight for the terror group in Syria.

Earlier this year it emerged that Alvin, 11, was at the Kurdish-controlled al-Hol refugee camp in northeast Syria, a vast, secured camp where dozens of former ISIS fighters' family members are still being held. His mother died a few steps away from him during fighting.

Afrim travelled to the camp in to find Alvin and a TV crew from a popular Italian show captured the emotional reunion between father and son. But camp authorities would not allow Afrim to take Alvin back to Italy with him then for bureaucratic reasons.


In mid-October, the TV show galvanized public opinion in Italy, leading to a joint effort between the International Red Cross, Red Crescent, and Italian and Albanian authorities to bring Alvin home.

The Fight Against ISIS More

More in The Fight Against ISIS

On Friday, Italian police video showed a teary reunion between the boy, his two sisters and his father at Rome's Fiumicino airport.

"We reiterate our call to governments: we cannot leave the children of al-Hol camp alone, we need the political will, we must speed up repatriation processes," tweeted Francesco Rocca, president of the International Federation of Red Cross and Red Crescent.

American women and children who lived under ISIS in Syria returned to U.S.


Syria's Kurds hold thousands of foreign suspected ISIS fighters and their families in camps and prison facilities across the north of the country, including an estimated 8,000 children, more than half of them under the age of five.

According to the United Nations, hundreds of the children are unaccompanied.

The Kurdish authorities have repeatedly asked Western countries to take back the people from their nations, but few have heeded those calls. Austria, Germany, France and Belgium have repatriated a handful of orphans, and the U.S. several women and their children.

Italian authorities have allowed Alvin to return to Italy, although neither he nor his father have Italian citizenship.

A day to be proud of Rick Rescorla