A Cal State University Northridge student is still in China on Thursday night, near the epicenter of the coronavirus outbreak — his semester studying abroad turning into a health care nightmare, CBS Los Angeles reported.

"I never cry," Nancy Krank, the student's mother, said while talking about her son, Samson Adame.

The 24-year-old student has been stuck in the Shandong Province of China since the coronavirus epidemic broke out nearly a month ago. Photos he took and shared with his mom showed empty, shut down streets. She said he only leaves the home he's in to get food and water — with a mask on.

"As a mom, you want to help," Krank told CBS LA. "You want to fix things, and this is something there's no way I can fix." 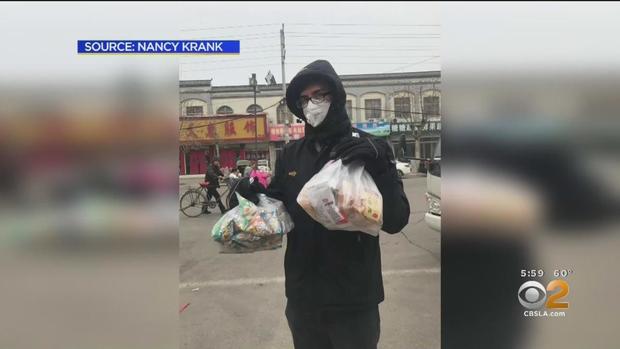 Samson Adame, a CSUN student, seen in an undated photo provided by his mother to CBS Los Angeles.


But Adame thought he would have gotten help from his school by now.

"They told them that the program was being postponed," Krank said. "They didn't know when it would start back up again. Maybe a week later, it's postponed, but they're telling him, 'Things are worse. Get on a plane. Let us know your flight number.'"

But Krank said that was not an option for her son who is staying in a village 300 miles from the nearest airport and was concerned about contracting the deadly illness while traveling.

Complicating matters even more, the university notified Adame that his travel insurance had been dropped because the program had been canceled.

"He's the last person that's going to get help without any kind of insurance," Krank said.

The university said it could not address Adame's case in particular, but released a statement that said, in part: "Campus officials worked to provide support and resources for those affected, and have been working with the Chinese Consulate to help facilitate each individual's return."

Krank said she believes there might be one other Cal State Northridge student left in Wuhan, and said that if her son cannot get home, she at least wants him protected with health insurance.

"Throw something out there and say we will take care of these two students until they're back," she said.

And while there are now nearly 1,500 deaths attributed to the disease and tens of thousands of cases in China, Krank said she was trying to remain positive since the village her son lives in has not had a single reported case of the illness.

This European company isn’t sugarcoating its...

Believe It Or Not, This Bibimbap Quiz Will Reveal What Kind Of Smart You Are
3

COVID-19 variant first found in U.K. could be dominant in U.S. by March
4

Which Member Of Blackpink Are You Based On Your Custom Ice Cream Order?