Beijing — China on Monday said it will ban entry to U.S. Senators Marco Rubio and Ted Cruz, Representative Chris Smith and Ambassador for Religious Freedom Sam Brownback over their criticism of the ruling Communist Party's policies toward minority groups and people of faith.

Foreign ministry spokesperson Hua Chunying said actions by the U.S. had "seriously damaged China-U.S. relations" and that China was determined to uphold its national sovereignty against what it sees as interference in its internal affairs.

"China will respond further according to the development of the situation," Hua said.


There was no indication that any of the four had plans to travel to China.

The travel bans appear to be direct retaliation for the U.S. imposition of sanctions on four Chinese officials, including Chen Quanguo, who heads the northwestern region of Xinjiang, where more than 1 million members of Muslim minority groups have been incarcerated in what China terms de-radicalization and retraining centers.

Critics have likened the camps to prisons to which inmates are sentenced with little due process and where they are compelled to denounce their religion, language and culture and pledge allegiance to the Communist Party and its leader, Xi Jinping. 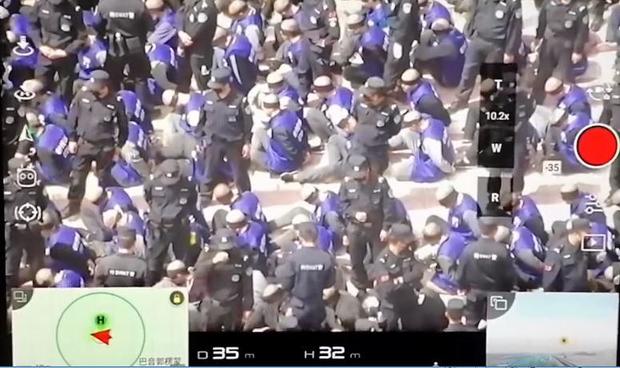 A screengrab from video uploaded to YouTube by an anonymous poster on September 17, 2019 shows what an Australian analyst says are Uighur Muslim detainees being handled by Chinese authorities at a train station in the Xinjiang province in August 2018.  YouTube/War on Fear

Bus driver beaten to death by passengers who...

15 Parents Who Didn't Know These Were Fails...