Manila — The Philippines became the Southeast Asian country with the highest number of coronavirus cases on Thursday, the same week it reimposed strict lockdown measures to try to curb its surging outbreak. The measures came after the government passed sweeping new anti-terror legislation that rights groups say is so vague it could be used to silence critics of its pandemic response.

The Philippines now has at least 122,754 confirmed cases of COVID-19 and 2,168 deaths, according to data compiled by Johns Hopkins University. On Saturday, 80 medical associations called for another lockdown, saying health care workers needed a "time out" as hospitals struggled to handle a five-fold increase in infections.

"If you want to resign or if you're too lazy, government personnel will help you and they will work," President Rodrigo Duterte said, lashing out at medical personnel.

"I can ask my soldiers and police officers to work 28 hours a day," he said.

"They have no credibility"

Medical professionals, however, warned that new lockdown measures alone would not be enough to combat the country's growing outbreak.

"We propose that this be used as a time out to refine our pandemic control strategies, addressing the following urgent conditions: hospital workforce efficiency, failure of case finding and isolation, failure of contact tracing and quarantine, transportation safety, workplace safety, public compliance with self-protection, social amelioration," Dr. Jose Santiago, president of the Philippine Medical Association, said in a web conference.

Dr. Julie Caguiat, a member of the CURE Covid Network, said that the country's coronavirus task force is mostly made up of former military generals and civil servants, rather than medical professionals.

"They have no credibility," she said in a press conference.

The government has rejected the criticism of its response to the outbreak.

"There is massive targeted testing. Hand in hand with our expanded testing strategy is intensified contact tracing capability. We are likewise strengthening our isolation capacity with more isolation centers," Duterte's spokesperson, Harry Roque, said in a statement.

"We were detained for three days" 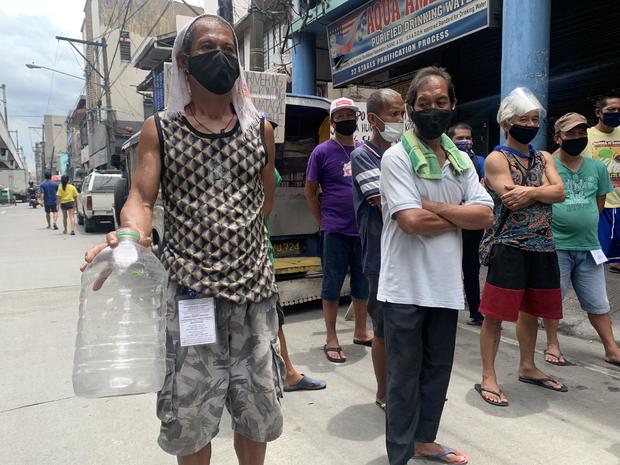 A jeepney driver in Manila, the Philippines holds out an empty bottle for change as he begs for help amid the coronavirus pandemic on August 6, 2020. Barnaby Lo


The reimposed lockdown has plunged many Filipinos, like the country's public transportation workers, into deep crisis. Many have not been able to work since the country first went into quarantine in March, and as income from family members with jobs overseas has dried up, some have found themselves in desperate situations.

Reynato Miraran, who drives one of the small buses called "jeepneys" that are ubiquitous in the Philippines, has been forced to beg on the streets to survive.

"We have been doing this since March. We have no other way of making money. We haven't received aid from the government either," Miraran told CBS News.

"Cops arrested us before and told us it's because we weren't observing social distancing," Jimmy Ortiz, another jeepney driver, said. "We were detained for three days."

A local official has threatened to kill quarantine violators, echoing Duterte's order in April for officers to shoot violators dead if they posed any danger, and checkpoints and uniformed personnel have resurfaced on city borders.

The Philippine economy, one of Asia's fastest-growing in recent years, has plunged into recession. It shrank 16.5% in the second quarter of the year, the worst performance on record for the country.

With no income and no assistance, jeepney drivers like Miraran and Ortiz say they are left with no choice but to violate lockdown rules and go out on the street to beg for help, despite the risks.

"The situation is bound to worsen"

Meanwhile, rights groups warned that new anti-terror legislation passed in July, which allows for people to be held for weeks without charge, could be used to target people critical of the government's handling of its pandemic response.

The new law outlines vague offenses like "engaging in acts intended to endanger a person's life," or doing something that's intended to "damage public property" or "interfere with critical infrastructure."

The Philippine Catholic Church compared the new legislation to the "national security" law recently imposed by China on Hong Kong.

"Already, we've heard statements from the military chief expressing his wish to use the law against social media users, a lot of whom criticize the government's handling of the [coronavirus] crisis," Carlos Conde, Asia researcher at Human Rights Watch, told CBS News.

"In an environment of horrific rights abuses and impunity, the situation is bound to worsen, especially now that authorities have another weapon at their disposal — the anti-terrorism law."

Plane skids off runway in India, killing 16 and...

U.K. leader tightens up COVID restrictions as virus surges back
2

Who Is Your "Grease" Pink Lady Alter Ego?
3

The Ratings Game: Nike stock surges 10% as fiscal 2021 revenue is expected to rise as much as low double digits
4

: Judge says Eric Trump must testify in New York probe prior to election