Home /
Business /
Markets /
Currencies: Why Yoshihede Suga will struggle to hold down the Japanese yen as he takes the reins from Abe

Currencies: Why Yoshihede Suga will struggle to hold down the Japanese yen as he takes the reins from Abe 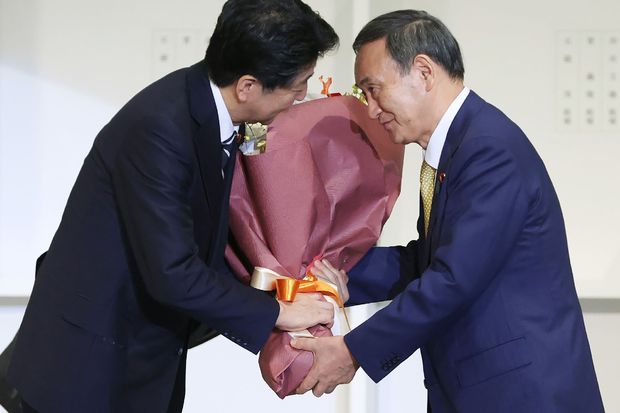 Yoshihide Suga is stepping out of the shadows and into the spotlight as he prepares to replace Shinzo Abe as prime minister of Japan, but the veteran politician has his work cut out for him when it comes to preserving one component of the incumbent’s economic legacy. 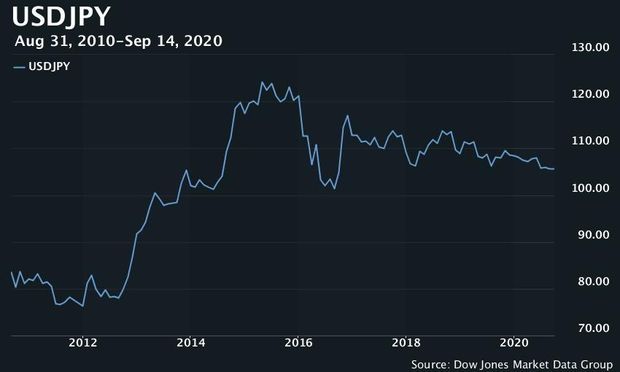 A much weaker Japanese yen has been credited with buoying Japan’s economy during Abe’s tenure. One U.S. dollar USDJPY, -0.44% fetched less than 80 yen in late 2012. The Japanese currency tumbled sharply as Abe took office and began pressing his economic agenda, dubbed “Abenomics.” A dollar fetched more than 125 yen in 2015. The Japanese currency has since regained some ground and now trades near 106 yen to the dollar, still substantially weaker than where it was before Abe took office.

Suga is no stranger to forex traders. The Nikkei Asian Review noted that as chief cabinet secretary, Suga focused on controlling the appreciation of the yen. The Bank of Japan, Ministry of Finance and Financial Services Administration were ordered to meet regularly to monitor speculative activity, while Suga used his post to warn against excessive appreciation, the report said.

Read: Japan’s new leader Yoshihide Suga was Shinzo Abe’s key enforcer of Abenomics. But he has to tackle coronavirus and the recession

Japanese news reports say Suga may be less aggressive on fiscal easing than Abe, while continuing to favor a weaker yen. Suga has indicated he sees room for the Bank of Japan to build on its extremely aggressive monetary easing, economists noted.

But skeptics question whether there is much left in the BOJ toolbox, and note that a trend toward an overall weaker dollar DXY, -0.29% offers another constraint.

The BOJ, which meets later this week, has already gone much further than other major central banks and appears worried that additional measures, including cutting rates further below zero, could do further damage to the country’s financial sector, said Jonas Goltermann, senior economist at Capital Economics, in a Monday note.

And then there are other central banks to contend with. They have moved aggressively in the past year in reaction to the pandemic, with further steps expected from the Federal Reserve, European Central Bank and Bank of England, among others, over the next year, Goltermann said. That is in contrast to 2012, when the Bank of Japan began easing policy just as the Fed’s post-financial crisis easing cycle was coming to an end. 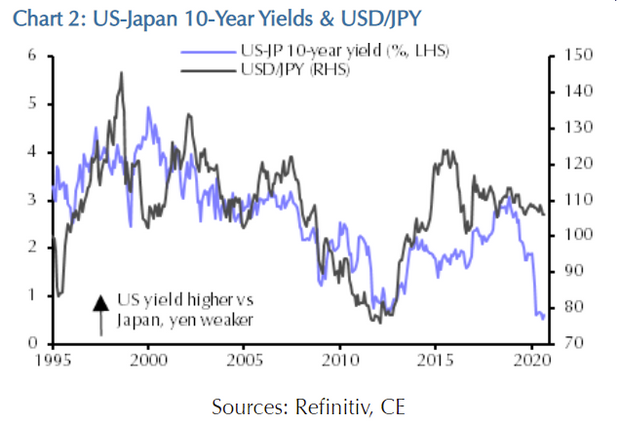 “So even as the BoJ was pushing interest rates in Japan down, U.S. long-term rates were beginning to rise (see chart above), which helped weaken the yen. This year, interest rate differentials have moved sharply in favor of the yen, making appreciation against the dollar more likely,” he said.

Steven Barrow, head of G-10 strategy at Standard Bank, last week offered a downbeat look at the legacy of Abenomics, arguing that all three of its oft-discussed “arrows” — aggressive monetary policy easing aimed at returning subdued inflation back to 2%, aggressive fiscal easing, and structural reforms — fell short of their marks.

The “key success,” aside from Abe’s longevity as premier, came with the early appointment of Haruhiko Kuroda as Bank of Japan governor and a plunge in the value of the yen as the central bank implemented its program of quantitative and qualitative easing, or QQE.

But Suga’s prospects of maintaining a much weaker currency appear dim, Barrow said.

The new leader will not be able to call on the sort of monetary easing from the BoJ that is likely to create a slump in the yen. The further along the monetary easing road the BoJ travels the smaller the scope to provide big stimulus. What’s more, just about all of Abe’s tenure has been during a bull run for the dollar, which started around a year before he came to power. We now think this bull run has turned to a bearish tack that could last many years. If that is the case then Suga…might not even achieve the one significant ‘success’ that Abe managed during his near eight years in office.

Building Websites is Easy with This Bootstrap...