Economic Report: The 245,000 new jobs added last month is smallest since U.S. recovery began in May 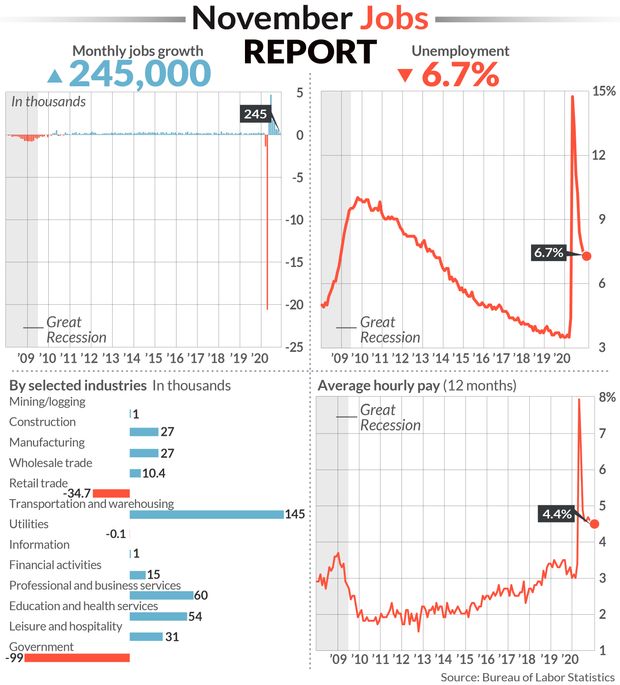 The numbers: The U.S. regained 245,000 jobs in November and the unemployment rate declined again, but hiring fell to a seven-month low in a clear sign the record rise in coronavirus cases is damaging the economy and making it harder for people to return to work.

The increase in jobs last month fell short of the 432,000 forecast of economists polled by MarketWatch. The reaction on Wall Street was muted, with stocks opening modestly higher. 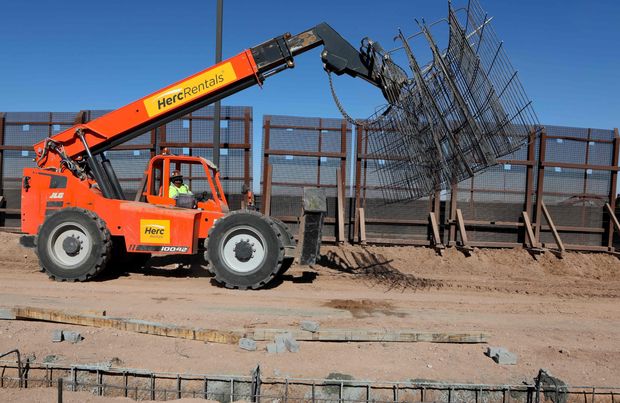 The unemployment rate, meanwhile, fell for the seventh month in a row to 6.7% from 6.9%, marking a new pandemic low.

Yet the decline mostly reflected 400,000 people dropping out of the labor force because they either couldn’t find work or had to care for a family member who caught the coronavirus.

The Bureau of Labor Statistics said the unemployment rate would have been as much as 0.4 points higher, or 7.1%, if its household survey more accurately captured the true employment status of people who are not working right now.

The pace of hiring had been slowing for months, as expected, after millions of people returned to their jobs in May and June. Yet the U.S. has only recouped just over half of the 22 million jobs lost early in the pandemic and a winter surge in coronavirus cases threatens more layoffs at businesses such as restaurants, hotels, airlines and mom-and-pop stores.

The softening labor market and mounting damage from the coronavirus could pressure Congress to end a months-long standoff and pass a new package of federal aid for the unemployed and struggling businesses.

What happened: The biggest gain in hiring last month took place at warehousing and transportation companies such as UPS and Fedex.

They added 145,000 new jobs ahead of the holiday season, reflecting an increase in online shopping and an improvement in the goods-producing part of the economy.

Employment at professional firms rose by 60,000 and health-care companies created 46,000 jobs as they continued to recover from a sharp decline in employment last spring.

Manufacturers added 27,000 jobs, but companies are struggling to find skilled workers and suffering more absenteeism because of the pandemic.

Financial firms also hired 15,000 people amid a stock market boom and flood of people applying for mortgages or refinancing home and auto loans.

Outside of those areas, employment was weak or job losses mounted.

Construction companies hired just 1,000 people. Although home sales have surged during the pandemic, builders also face a shortage of skilled employees and they don’t want to invest too aggressively until the economy makes a broader recovery.

Bars and restaurants shed 17,000 jobs — the first decline since the height of the coronavirus pandemic in April. They face renewed restrictions across the country on how long they can be open and how many customers are allowed.

Retailers, another industry hard hit by the pandemic, cut almost 35,000 jobs in November. Part of the decline reflected fewer seasonal hires in anticipation of less holiday spending, but retailers are also coping with new government restrictions and fewer customers willing to venture out.

Also: Jobless claims are inflated and many unemployed were underpaid

Big picture: The economy is likely to make a strong recovery next year if a slew of coronavirus vaccines prove effective, but it’s going to experience more bumps before it gets there.

The recent slowdown in hiring and threat of a new round of layoffs owing to the coronavirus are the latest bumps. How big they get —- and whether it derails the recovery — will depend on whether the virus is brought under control soon and if Washington approves more aid for workers and businesses.

What they are saying? “The American labor market hit a major speedbump in November due to the second wave of the coronavirus,” said senior economist Sal Guatieri of BMO Capital Markets.

“With the significant drop in private job creation, prospects for a continued strong recovery in consumer spending may be at risk,” said Brad McMillan, chief investment officer for Commonwealth Financial Network. “This is a wake up call for the Congress and should support more Federal stimulus.”

The Escape Home: Buying a home sight-unseen is...

Market Snapshot: Dow set to rise over 200 points rise as markets ready for transition to Biden from Trump
5

Biden promises to defeat domestic terrorism (How will he do that?)