Home /
Business /
Markets /
Election: Trump accuses Biden of wanting to ‘destroy the oil industry,’ as Democrat says it should be replaced ‘over time’

Election: Trump accuses Biden of wanting to ‘destroy the oil industry,’ as Democrat says it should be replaced ‘over time’ 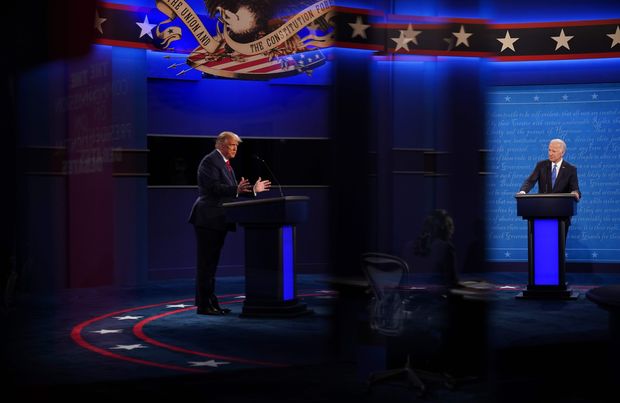 President Donald Trump at Thursday night’s debate attacked Joe Biden over his plans for the energy industry, while the Democratic challenger said they are long-range proposals and Trump was taking “everything out of context.”

“It has to be replaced by renewable energy over time, over time,” Biden said, also noting that he would stop giving federal subsidies to the oil industry.

Read: Trump, Biden attack each other over virus, stock market and economy in final debate

But Biden wasn’t having it: “He takes everything out of context, but the point is, look, we have to move toward a net zero emissions. The first place to do that by the year 2035 is in energy production.”

Still, the exchange resonated with Trump supporters, such as Dan Bongino, a political commentator and former Republican candidate for Congress. Bongino suggested in a tweet that “hundreds of thousands of energy industry workers had their eyes opened tonight. Biden will destroy your livelihoods, and he finally admitted it.”

The American Petroleum Institute, a trade group, also released a statement in the wake of the debate.

“Democrats, Republicans and Independents know that the U.S. natural gas and oil industry XOP, +5.24% delivers affordable and reliable energy to American families and businesses and all over the world,” said API’s president and CEO, Mike Sommers. “We are proud of the grit, innovation and progress we’ve made so that Americans no longer have to choose between environmental progress and access to affordable, reliable and cleaner energy. And we aren’t going anywhere.”

Trump and Biden also clashed over fracking, with the president accusing his opponent of saying he will get rid of the controversial extraction method for oil and gas, and Biden saying he never made that statement.

With just 12 days until the presidential election, political analysts had characterized the second and final debate as the last-chance saloon for Trump if he wants to turn around the trends in the White House race, as betting markets and swing-state polls keep favoring Biden. The clash took place at Belmont University in Nashville, Tenn., and NBC’s Kristen Welker served as the moderator.

Election: Trump, Biden attack each other over...

Americans could owe an estimated $7.2 billion...