England's pubs reopen as officials warn it is not "risk-free"

England's famed pubs reopened Saturday with restrictions after closing more than three months ago due to the coronavirus pandemic, although the country's health minister warned that going out is not "risk-free." While new infections are declining in the United Kingdom, the country still has the highest death toll in Europe.

In the biggest easing of lockdown rules so far, pubs, restaurants, hairdressers, cinemas and theme parks all reopened in England and Northern Ireland on Saturday, BBC News reported. Restrictions on the hospitality sector remained in place in Scotland and Wales. According to the Night-Time Industries Association, 31% of pubs and restaurants stayed shut despite the roll back of restrictions due to safety concerns.

Social distancing guidelines still urge people in England to stay two meters, or roughly six feet, apart, but new "one meter plus" guidelines allow people to get closer if they are wearing masks or not sitting face-to-face. Pub-goers must now register in advance and stay no longer than three hours.

Weddings with up to 30 guests are also allowed under the new rules. 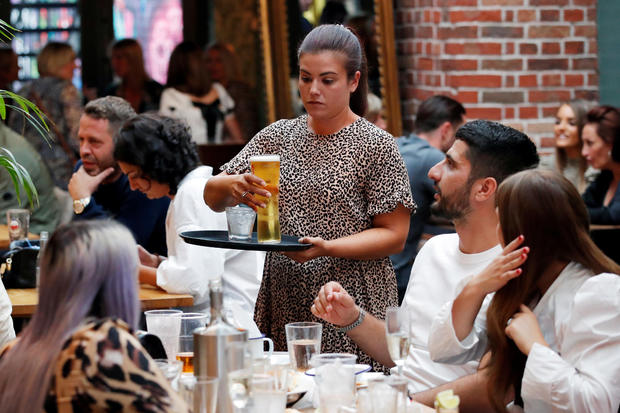 An employee is seen with customers at The Practicioner pub after it reopened following the outbreak of the coronavirus disease (COVID-19), Hertford, Britain, July 4, 2020. ANDREW COULDRIDGE / REUTERS


At The Bell and Crown in west London, Chancellor Rishi Sunak said it was "good news" people were out working again. Sunak said the almost half a million people who worked in Britain's pubs and bars were "helping us all to enjoy summer safely."

Britain's chief medical officer, Chris Whitty, said Friday that "nobody believes this is a risk-free step," but said "there is no perfect, exact way of doing it."

"There's no doubt these are environments whose principal job it is to bring people together. That's a great thing to do socially, but it's also a great thing from the virus' point of view," he said. "And therefore we do have to have a really clear and really disciplined approach to try and maintain social distancing whilst also enjoying pubs."

British Prime Minister Boris Johnson called Saturday's reopening "the biggest step yet on the road to recovery," BBC News reported. But Johnson warned he would "not hesitate" to reimpose restrictions if the number of coronavirus cases spiked.

With more than 44,000 deaths due to the coronavirus, Britain has the third-highest death toll in the world, trailing only the United States and Brazil. There were 544 new cases confirmed on Friday, the lowest number reported since mid-March, according to BBC News.

England reopens pubs and other businesses as...

New Zealand "beat the virus" but what happened next?
3

Gallup: Majority of black Americans want police staffing levels to remain where they are
4