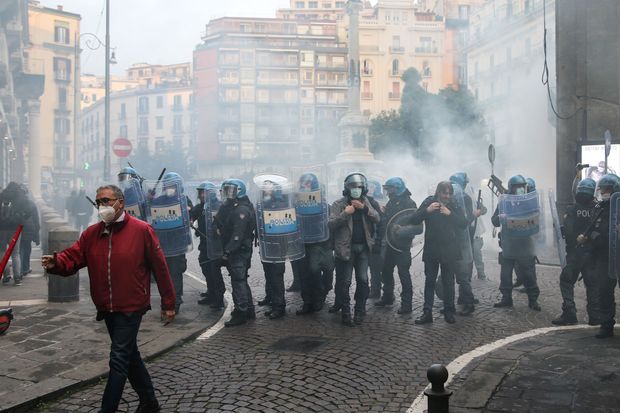 Italian anti-riot policemen clash with demonstrators over measures to fight the spread of COVID-19 in the center of Naples, southern Italy, on October, 24, 2020.

European stocks traded lower on Monday on a combination of worries, including a profit warning from business software giant SAP, new restrictions on activity in response to COVID-19, and difficulties in U.S. stimulus talks.

Further restrictions on activity were introduced in Europe to fight a second wave of the coronavirus pandemic. Italy from Monday will close bars and restaurants by 6 p.m., and shut cinemas and gyms altogether, while Spain is introducing an 11 p.m. curfew. World Health Organization Director-General Tedros Adhanom Ghebreyesus said Northern Hemisphere countries are facing a “dangerous moment.”

House Speaker Nancy Pelosi and White House chief of staff Mark Meadows on Sunday accused each other of moving the goal posts in stimulus talks, in separate interviews they gave to CNN.

Investors in Europe also are positioning ahead of talks between the European Union and the U.K. on a post-Brexit trade deal, this week’s European Central Bank meeting, and next week’s U.S. elections.

“Most investors want to remain optimistic about the upside potential of stock markets but they are becoming increasingly skeptical about the next U.S. stimulus package. In addition, recent record-breaking infection levels in many hot spots has led the EU to implement tougher restrictions (nationwide curfew in Spain, toughest Italian measures since May) which are widely expected to hurt businesses,” said Pierre Veyret, technical analyst at ActivTrades.

The closely followed Ifo business climate index for Germany fell in October for the first time in five months.

Also of note, the dollar USDTRY, +1.19% broke through 8 Turkish lira, another indicator of the economic struggles Turkey is facing.

SAP SAP, -18.28% SAP, +1.38% dropped 18% — its worst single-day performance since losing 23% on Oct. 23, 1996 — as the German business software giant revised down its 2020 outlook, saying the impact of COVID-19 has been to push back customer investments between one and two years. SAP said its 2023 operating margin would be up to 5 percentage points lower than it previously targeted.

IT consultant Capgemini CAP, -4.25% also dropped after the SAP warning.

Bayer BAYN, +0.51% rose 2% after the German pharmaceutical and chemicals company said it would pay up to $4 billion for Asklepios BioPharmaceutical, a U.S.-based biopharmaceutical company specializing in gene therapies.

Peter Morici: Neither Trump nor Biden have good...

BookWatch: How much is enough? Less than you think