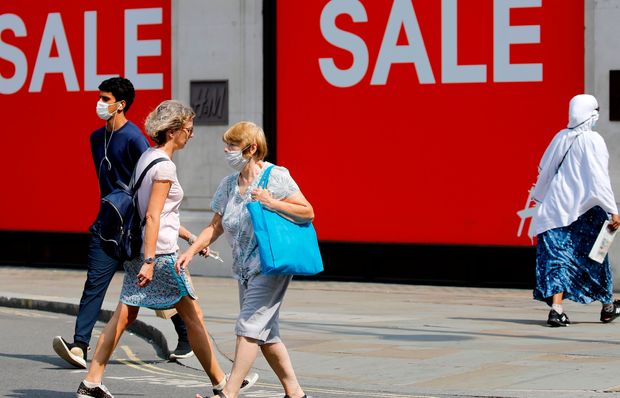 Pedestrians, some wearing a face mask or covering due to the COVID-19 pandemic, walk past a "Sale" sign in the window of a H&M store in London on August 12, 2020.

European stocks edged higher in early trading Tuesday amid signs of an economic recovery across the globe, with the retail sector rallying on better-than-expected results.

The Stoxx Europe 600 SXXP, -0.04% edged up 0.1%. The U.K. FTSE 100 UKX, +0.20% led the major national indexes with a 0.5% gain, as the British pound remained under pressure as the U.K. government pushes through a law backtracking on last year’s European Union withdrawal agreement that it admits would violate international law.

In the world’s second-largest economy, China reported its first rise in retail sales since the pandemic. In the U.K., the unemployment rate edged higher in what one economist said was a labor market in a holding pattern while the country’s job-retention program runs through October.

Faurecia EO, -7.24% shares slumped after Peugeot UG, -2.68% said it would delay the distribution of its shares in the auto supplier to Fiat Chrysler FCA, +5.31% FCAU, +1.53% until after the merger has completed. The two automakers are amending their merger agreement, and Fiat Chrysler shareholders will receive a smaller dividend, as they increased their estimates of synergies.

Coffee mogul jolts no one with an endorsement...