Dubai, United Arab Emirates — A California-based member of an Iranian militant opposition group in exile was abducted by Iran while staying in Dubai, his family said Tuesday.

The suspected cross-border abduction of Jamshid Sharmahd appears corroborated by mobile phone location data, shared by his family with The Associated Press, that suggests he was taken to neighboring Oman before heading to Iran.

Iran hasn't said how it detained Sharmahd, though the announcement came against the backdrop of covert actions conducted by Iran amid heightened tensions with the U.S. over Tehran's collapsing nuclear deal with world powers.

Iran accuses Sharmahd, 65, of Glendora, California of planning a 2008 attack on a mosque that killed 14 people and wounded over 200 others, as well as plotting other assaults through the little-known Kingdom Assembly of Iran and its Tondar militant wing. It aired an interview of him on state television - footage that resembled many other suspected coerced confessions broadcast by the Iranian government in the last decade.

His family, however, insists Sharmahd only served as a spokesman for the group and had nothing to do with any attacks in Iran. Sharmahd, who supports restoring Iran's monarchy that was overthrown in the 1979 Islamic Revolution, already had been targeted in an apparent Iranian assassination plot on U.S. soil in 2009. 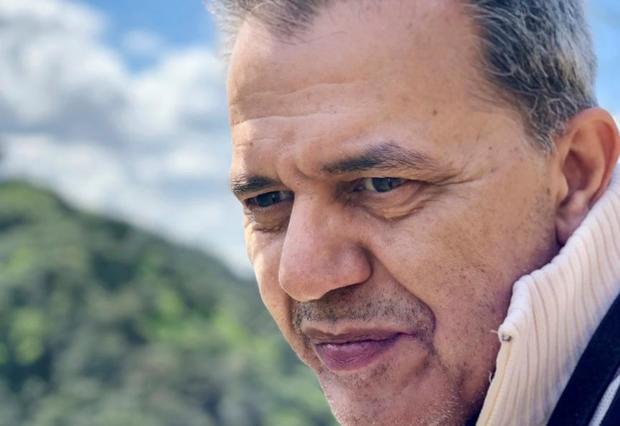 Undated photograph provided by the family of Jamshid Sharmahd. Sharmahd family via AP


"We're seeking support from any democratic country, any free country," his son Shayan Sharmahd told the AP. "It is a violation of human rights. You can't just pick someone up in a third country and drag them into your country."

Iran's Intelligence Ministry has not elaborated on how it detained the elder Sharmahd, other than to deny he was arrested in Tajikistan. The ministry and Iran's mission to the United Nations did not immediately respond to requests for comment.

Sharmahd had been in Dubai, trying to travel to India for a business deal involving his software company, his son said. He was hoping to get a connecting flight despite the ongoing coronavirus pandemic disrupting global travel.

Sharmahd's family received the last message from him on July 28. After that, he no longer responded to their calls and messages, his son said. Telephone location data showed his mobile phone that day at the Premier Inn Dubai International Airport Hotel, where he had been staying.

It's unclear how the abduction happened. A hotel operator said Sharmahd had checked out July 29. Tracking data showed Sharmahd's mobile phone traveled south from Dubai to the city of Al Ain on July 29, crossing the border into Oman and staying overnight near an Islamic school in the border city of al-Buraimi.

On July 30, tracking data showed the mobile phone traveled to the Omani port city of Sohar, where the signal stopped.

Two days later, on Saturday, Iran announced it had captured Sharmahd in a "complex operation." The Intelligence Ministry published a photograph of him blindfolded.

His son said he believed that in the state TV footage, Sharmahd hurriedly read whatever Iran wanted him to say.

"Imagine your own father being tied up one day on television and you see that," Shayan Sharmahd said.

Western officials believe Iran runs intelligence operations in Dubai and keeps tabs on the hundreds of thousands of Iranians living in the city-state. Iran is suspected of kidnapping and later killing British-Iranian national Abbas Yazdi in Dubai in 2013, though Tehran has denied involvement.

It isn't just Iran that maintains a presence in Dubai in the United Arab Emirates, home to some 5,000 U.S. troops and the U.S. Navy's busiest port of call outside of America. The U.S. State Department runs its Iran Regional Presence Office in Dubai, where diplomats monitor Iranian media reports and talk to Iranians.

Dubai's hotels long have been targeted by intelligence operatives, such as in the suspected 2010 assassination by the Israeli Mossad of Hamas operative Mahmoud al-Mabhouh. Dubai and the rest of the UAE have since invested even more in an elaborate surveillance network.

Dubai police and officials, as well as federal officials in Abu Dhabi and the Omani Embassy in Washington, did not respond to requests for comment.

However, over the last year, a series of escalating incidents have shaken the wider Mideast, leading to a U.S. drone strike in January that killed a top Iranian general in Baghdad and an Iranian ballistic missile attack that injured dozens of American soldiers in Iraq. Also, there have been explosions on oil tankers off the Emirati coast that the U.S. Navy has blamed on Iranian limpet mines.

Last month, an oil tanker seized by the UAE after being suspected of smuggling Iranian crude oil was hijacked, likely by Iran. In June, Iran sentenced to death another opposition journalist living in Paris it detained under unclear circumstances.

For now, Sharmahd's family said they contacted the government in Germany, where he holds citizenship, and the U.S. government as he's lived for years in America and was on track for citizenship after the 2009 assassination plot.

The German Embassy in Tehran has asked Iranian authorities for consular access, according to the Foreign Ministry in Berlin, hoping to understand how Sharmahd was arrested. However, Iran doesn't allow consular access for its dual nationals, considering them exclusively Iranian citizens.

The State Department, which mistakenly referred to Sharmahd in an earlier report as an American citizen, acknowledged his arrest and said Iran "has a long history of detaining Iranians and foreign nationals on spurious charges."

While Iran has yet to say what charges Sharmahd faces, others detained over the 2008 bombing have been convicted and executed. Sharmahd's son said his father suffers from Parkinson's disease, as well as diabetes and heart trouble that require medication and careful monitoring.

"He's very much at risk," his son said. "All of us are extremely concerned."