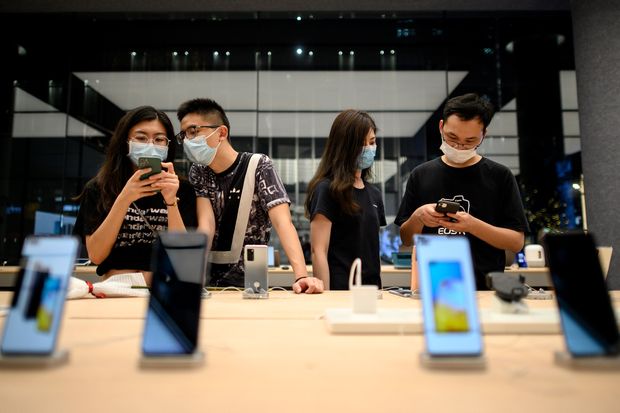 Prospective customers look at smartphones on display at Huawei's flagship store in Shenzhen, China, in May.

For the first time, Huawei Technologies Co. has passed Samsung Electronics as the world’s No. 1 supplier of smartphones, according to new data from research company Canalys.

China’s Huawei shipped more smartphones in the second quarter of 2020 than any other company, Canalys said Wednesday, marking the first time in nine years that neither Samsung 005930, +0.67% nor Apple Inc. AAPL, +1.91% was in the top spot.

Huawei shipped 55.8 million devices in the second quarter, Canalys said, down 5% year-over-year, while Samsung shipped 53.7 million, 30% less than the prior year due to disruptions caused by the coronavirus pandemic.

“This is a remarkable result that few people would have predicted a year ago,” Canalys senior analyst Ben Stanton said in a statement. “If it wasn’t for COVID-19, it wouldn’t have happened.”

The achievement was largely due to Huawei’s domination of the Chinese market, where 70% of its smartphones are sold. Huawei’s China sales rose 8% in the second quarter, though its overseas shipments dropped 27%.

“Huawei has taken full advantage of the Chinese economic recovery to reignite its smartphone business,” Stanton said. “Samsung has a very small presence in China, with less than 1% market share, and has seen its core markets, such as Brazil, India, the United States and Europe, ravaged by outbreaks and subsequent lockdowns.”

Canalys analyst Mo Jia said the milestone is more a symbolic victory for Huawei than a shift in the smartphone industry.

“Taking first place is very important for Huawei,”  Jia said in a statement. “It is desperate to showcase its brand strength to domestic consumers, component suppliers and developers.” But due to government blacklists and general wariness of the Huawei brand in the West, “strength in China alone will not be enough to sustain Huawei at the top once the global economy starts to recover.”

Chrissy Teigen Chopped Off Most Of Her Hair And...