In an election year, Americans admit reading news they don’t trust. Why?

American journalism is in the crosshairs.

More than 80% of Americans say they believe the spread of misinformation is a major problem this election year, yet many people frequently read articles from news sites that they do not trust, according to a poll released Wednesday by USAFacts, a nonprofit civic initiative, and The Associated Press-NORC Center for Public Affairs Research at the University of Chicago.

People are also reading news from nontraditional sources. The poll found that four in 10 Americans get information about the government from local and national television networks, cable news and social media, yet none of those sources are trusted by more than 25% of those surveyed. Case in point: 37% said they get their information from social media, but only 7% say they trust it.

“ ‘Most find it difficult to know if campaign information is true and they are unable to determine trusted sources to turn to for help.’ ”

“Research also shows that Americans trust in the mainstream media is at a historical low point, so another reason Americans read news sources they don’t trust is because there aren’t many or any alternatives that they do trust,” says Aram Sinnreich, an associate professor and chair of communication studies at American University in Washington, D.C.

In the U.S., President Donald Trump has labeled media outlets that have reported critically on his administration as “fake news,” and has described CNN, NBC, ABC, CBS and the New York Times NYT, +2.24% as “the enemy of the American people.” This week, Trump reportedly walked out early from a CBS “60 Minutes” interview with Lesley Stahl, and threatened to release the footage early.

On Wednesday, the president again tweeted criticisms of the press, a practice analysts say may erode trust in the institution: “I am pleased to inform you that, for the sake of accuracy in reporting, I am considering posting my interview with Lesley Stahl of 60 Minutes, PRIOR TO AIRTIME! This will be done so that everybody can get a glimpse of what a FAKE and BIASED interview is all about...”

USAFacts president Poppy MacDonald said, “Americans are expressing a strong desire for factual information on a range of topics, including elections and government outcomes, and they want that information to be data-driven. Instead, they often get rhetoric and statements from sources they don’t necessarily trust and therefore have difficulty knowing what to believe.“

What’s more, the avalanche of headlines online makes it hard for people to discern if their news comes from a nonpartisan source, notwithstanding the outlet’s editorial stance, particularly in swing states. The closure of local newspapers that were often read by multiple generations of the same family has created an opportunity for politically-motivated sites to fill the vacuum.

The Wall Street Journal this week cited two local news sites, The Copper Courier in Arizona and the Decatur Times in Alabama, just two outlets that have sprung up in states reporting news that will likely influence voters in the runup to the presidential election on Nov. 3. The former has ties to Democratic donors. The latter has ties to Republican donors and operatives, the WSJ reported.

“ ‘The pandemic came in on the heels of this other societal issue of misinformation that the world is still figuring out.’ ”

— Justin Pomerance, assistant professor of marketing at the University of New Hampshire

“Heading into the election this year, most find it difficult to know if campaign information is true and they are unable to determine trusted sources to turn to for help,” said Trevor Tompson, the director of The Associated Press-NORC Center for Public Affairs Research. “But the good news is, many Americans have found it easy to find out how to register to vote or cast their ballot.”

One piece of advice for people who are reading news they don’t trust: Think before you click. For instance, people who get their news from social-media platforms like Facebook FB, +4.17%   and Twitter TWTR, +8.35%   are more likely to have misperceptions about COVID-19, according to a recent study led by researchers at McGill University in Montreal.

People are more likely to believe news they read in more familiar news sources. “Those that consume more traditional news media have fewer misperceptions and are more likely to follow public health recommendations like social distancing,” concluded the paper, which was published in the Misinformation Review.

Twitter and Facebook have increasingly become the primary sources of news, and misinformation, the study said. “In the context of a crisis like COVID-19, however, there is good reason to be concerned about the role that the consumption of social media is playing in boosting misperceptions,” said Aengus Bridgman, a political scientist and co-author of that study.

A study in the latest issue of Journal of the Association for Consumer Research suggested that when people are exposed to fake news that sows more discord about the world, it compounds the uncertainty they may already feel during a tumultuous political election year and a coronavirus pandemic that does not appear to have an immediate vaccine or, indeed, end in sight.

“COVID-19 did not occur in a vacuum,” said Justin Pomerance, an assistant professor of marketing at the University of New Hampshire and a study co-author. “The pandemic came in on the heels of this other societal issue of misinformation that the world is still figuring out.” That uncertainty can cut both ways, and cause people to save more money or spend more money to console themselves.

And what people read about COVID-19 or the forthcoming presidential election between Trump and his Democratic rival Joe Biden affects their mood, state of mind, political stance and even financial decisions. “If you’re like me, you’re bombarded daily by financial news that screams for your attention,” said Binod Shankar, a certified financial analyst.

In a recent article for the CFA Institute, he wrote: “A lot of what we read is either irrelevant, shallow, or incomplete and hence misleading and distracting.” To help consumers of news to become more discerning, he identified red flags to be wary of, including commentators referred to as “experts.” Single-day market movements, he added, “rarely tell us anything about the direction of the market.” 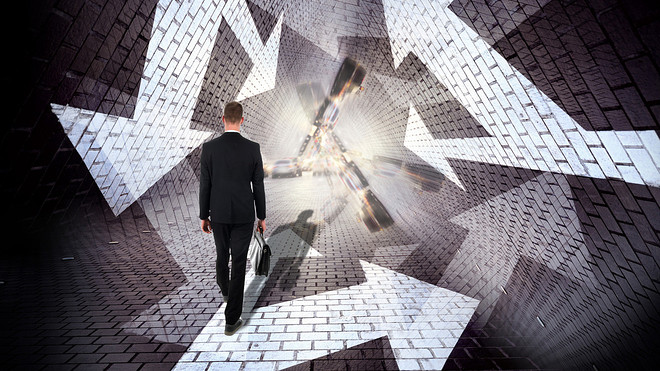 One reason why people read news they don’t trust could be the rise in opinion journalism, and/or a blurred line between facts and commentary.

Consumers are more likely to be drawn to information that confirms their existing beliefs, researchers say, and that can reinforce their exposure to fake news on social-media sites whose algorithms serve up information based on browsing histories. Reminding people of past misinformation helps correct it, according to an article in the latest issue of the journal Psychological Science.

“Reminding people of previous encounters with fake news can improve memory and beliefs for facts that correct misinformation,” said Christopher Wahlheim, a lead author on the paper and assistant professor of psychology at the University of North Carolina, Greensboro. “This suggests that pointing out conflicting information could improve the comprehension of truth in some situations.”

Another reason people read news they don’t trust could be the rise in opinion journalism, and/or a blurred line between facts and commentary. In a separate study released last year, researchers found a major shift occurred between 1989 and 2017 as journalism expanded outside of traditional media, such as newspapers and TV networks, to 24-hour cable news channels and digital outlets.

“Our research provides quantitative evidence for what we all can see in the media landscape,” Jennifer Kavanagh, a senior political scientist at RAND, a nonprofit think tank based in Santa Monica, Calif., said in a news release. “Journalism in the U.S. has become more subjective and consists less of the detailed event- or context-based reporting that used to characterize news coverage.”

The analysis — carried out by a RAND text-analytics tool previously used to scan for support for and opposition to Islamic terrorists on social media — scanned millions of lines of text in print, broadcast and online journalism from 1989 (the first year such data were available via LexisNexis) to 2017 to identify usage patterns in words and phrases.

Before 2000, broadcast news was more likely to include relatively complex academic and precise language, and complex reasoning, the researchers said. After 2000, broadcast news became more focused on on-air personalities and talking heads debating the news. (The year 2000 is significant, as ratings of all three major cable networks in the U.S. began to increase dramatically.)

It’s not the only report to find a shift toward opinion and subjectivity in news. “Tumultuous news cycles have made an impact on global opinions regarding media,” the U.S. News & World Report’s 2019 countries ranking concluded. Some 63% of people say that there are no longer any objective news sources they can trust, and 66% say internet news and content are dividing people.

That survey drew on answers from 20,301 people around the world. Individuals from 36 countries in four regions — the Americas, Asia, Europe, and the Middle East and Africa — were surveyed: 11,238 were college-educated people who consider themselves middle class, and 5,963 were senior leaders in an organization or small-business owners. The rest were adults over 18.

The good news: Most Facebook users did not share fake news articles during the last presidential campaign, according to this study. Those who did were mostly Republican-identifying Americans over the age of 65. The findings suggest the need for “renewed attention” to educate “particular vulnerable individuals” about misleading information, the authors said.

So why are Republican baby boomers more likely to share fake news on Facebook? One theory: As they didn’t grow up with digital technology, they may be more susceptible to being fooled in an online environment. This is, perhaps, commonly seen with the variety of scams that have had success with older Americans by preying on their lack of familiarity with how computers and technology work.

But journalism, like all industries, has its limitations. Shankar, in his article, said that most crises are unpredictable. Nassim Taleb, the essayist and statistician, calls them black swans, Shankar wrote: “They are huge, rare, and impossible to foresee. In boxing, they say it’s the punch you don’t see coming that knocks you out. If that’s the case, who knows when it will come or from where?”

Adversaries May Launch Efforts to Undermine...