Home /
World News /
Inside the aftermath of Beirut's deadly explosion

Inside the aftermath of Beirut's deadly explosion

Beirut, Lebanon — Grief has turned to outrage following two explosions that wiped out portions of the capital. On Thursday, the death toll climbed to at least 149, with more than 5,000 wounded.

The U.S. military is sending three cargo planes to Lebanon filled with food, water and medical supplies. Tuesday's massive explosion was so powerful it left a smoking crater stretching more than 700 feet and registered as a 3.3-magnitude earthquake.

Beirut's busy city center has been torn to pieces. Life for so many turned into a living hell.

Including Seema Jillani, a Texas-born doctor, who was seen soothing her daughter by singing "Lean on Me" in the back of a packed ambulance.

Four-year-old Iman was badly injured after their home was all but destroyed in the explosion.

"I didn't even grab my stethoscope, which to me tells me a lot where my head was," Jillani told CBS News. "It really kills me that I'm not at the hospital right now offering my services. I wish I could be." 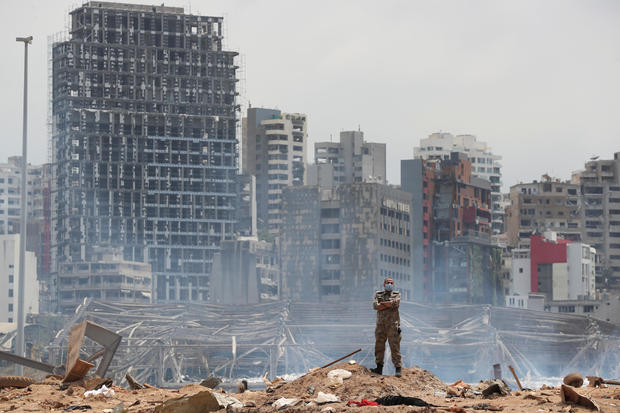 A soldier stands at the devastated site of the explosion at the port of Beirut, Lebanon, on Thursday, August 6, 2020. Thibault Camus via Reuters


Across Beirut are many more harrowing stories of survival. And streets littered with debris.

They are saying the officials are to blame for all this misery for ignoring repeated warnings about the more than 2,700 tons of Russian-owned ammonium nitrate stored at the port for years.

And so, yet again, the people of this city are left to pick up the pieces themselves. As they continue to endure the horrors of what appears to be an entirely avoidable disaster.

Meanwhile, there are calls for revolution against the Lebanese government. One well-known TV anchor tweeted: "Either they keep killing us, or we kill them."

Coroner issues ruling on why "Love...

April Ryan fangirls Kamala over her spot on ticket: "It sends chills through me"
3

These TV Shows Only Lasted One Season, So Which One Would You Rather Bring Back?
4