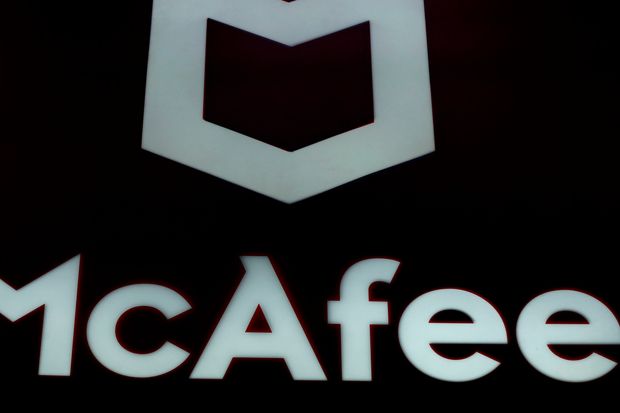 The McAfee logo is displayed at the Mobile World Congress in Barcelona on Feb. 25, 2019.

McAfee Corp. plans to return to the public markets after nearly a decade as a private company, but the security-software company is re-emerging as a structured entity that would take a team of lawyers and accountants to truly explain.

On Tuesday, McAfee MCFE, established a projected price range for its initial public offering of $19 to $22 a share, after initially filing for an IPO in late September. The company plans to list under the ticker “MCFE” on the Nasdaq. Underwriters include Morgan Stanley, Goldman Sachs, TPG Capital, BofA Securities, and Citigroup. The IPO involves 37 million shares, or 42.6 million if underwriters exercise all options to cover overallotments.

McAfee reportedly plans to price the IPO late Wednesday, with trading to begin on Thursday.

Here are five things you should know.

There are a few fingers in the pie

A little more than a decade ago, Intel Corp. INTC, +0.77% announced it was buying McAfee for $7.7 billion in a deal that closed the following year. About five years later, Intel sold a majority stake in McAfee to private-equity firm TPG for $4.2 billion. The following year, Thoma Bravo cut a deal with TPG to take a minority stake.

When all is said and done, TPG, Thoma Bravo and Intel will control about 82.2% of the voting power.

Following the IPO there will be two classes of stock, up to 166.7 million Class A shares and up to 264.7 million Class B shares, and each of those classes will carry one vote.

But that’s where simplicity ends, because those class distinctions are mixed up with a witches’ brew of exchanges of management incentive units and LLC units and reorganization transactions, as shown in this chart from the company’s filing with the Securities and Exchange Commission. 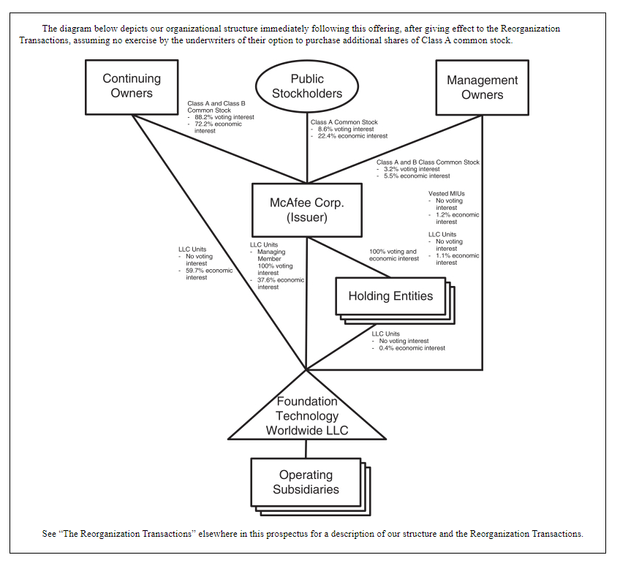 How all the moving parts fit together is not easy to deduce even after several readings of the SEC filing, but the bottom line appears to be that public stockholders will get 22.4% economic interest in the company with only 8.6% voting interest.

Profitable this year, until you factor in the reorganization

The security software company brought in $2.64 billion in revenue in 2019 for a loss of $236 million, according to McAfee’s S-1 filing. For the first 26 weeks of 2020, the company reported revenue of $1.4 billion and net income of $31 million, as long as you adjust the numbers for the massive reorganization and other factors

When the reorganization transactions and other pro forma adjustments are taken into account, McAfee ran at a $3 million loss for the first half of 2020.

McAfee said it plans to use about $525 million “to repay all outstanding obligations with respect to our Second Lien Term Loan,” while it estimates that if shares price at the midpoint of the range, or $20.50 a share, it will net about $612 million if underwriters exercise their full options of shares.

That’s only a drop in the bucket for McAfee’s debt after its private-equity flip, however. In its financial statements, McAfee lists $4.66 billion in debt, which it estimates should get cut down to $4.15 billion after the offering.

Founder not a risk factor

The recent arrest and federal charges against John McAfee, who founded the company in 1987 and left it in 1994, don’t pose a risk to the IPO, according to the SEC filing.

In its indictment, the Justice Department noted that from 2014 to 2018, when John McAfee is alleged to have not filed tax returns, he did not receive “any income or had any connection with the antivirus company bearing his name.” In 2017, John McAfee and Intel settled a lawsuit where McAfee agreed not to use his name or trademark his name in any security-related products or services.

: IBM stock slips after another revenue...