The next full moon is fast approaching, rising bright in the night sky on Friday, July 23. And it may appear a reddish-orange hue — not because of an eclipse, but because of the rampant wildfires spreading across the Western U.S.

Enormous wildfires are burning across several Western states, but winds are carrying the smoke much further, drifting across New York and the tri-state area and creating colorful sunrises and moonrises across the region.

The ongoing haze means this month's full moon could have that same orange glow.

According to the Farmer's Almanac, full moons get their names traditionally from Native American cultures, and some are also referred to by their Colonial American and European names as well. July's full moon is known as the "buck moon" — marking the time of year when the new antlers of buck deer grow out of their foreheads — named by the Algonquin tribes in what is now the northeastern U.S. 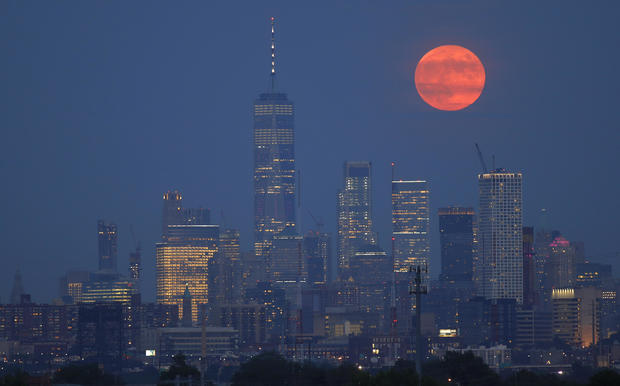 The full buck moon rises above the skyline of lower Manhattan and One World Trade Center in New York City on July 16, 2019, as seen from Kearney, New Jersey. Gary Hershorn / Getty Images

The full moon arrives on Friday night, July 23, rising after sunset and reaching peak illumination at 10:37 p.m. ET, according to NASA. Look toward the southeast to watch it rise over the horizon.

The moon will appear for about three days surrounding the peak, from about Thursday night to Sunday morning.

You can find the exact moonrise and moonset times for your location from timeanddate.com.

"As usual, the wearing of suitably celebratory celestial attire is encouraged in honor of the full Moon," NASA's Gordon Johnston says.

Gordan warns that skywatchers should take particular caution when looking to spot the full moon this month, due to the frequent thunderstorms this time of year.

"A good rule to follow is, if you can hear the thunder, you can be struck by the lightning," he said.

From Friday night into Saturday morning, the full moon will move toward Saturn, with the planet appearing about 8 degrees above the moon in the southwest by morning twilight. Throughout the weekend, the moon will appear to shift further and further away.

With clear conditions and a telescope, Jupiter's four bright moons, Ganymede, Callisto, Europa, and Io will be visible. Saturn's rings, and its largest moon, Titan, can also be spotted during this time.

It's so hot in Dubai that the government is...