“People will always say, ‘She's so big.’ And I'll say, ‘Oh, she's so tall.’ I try to make them be more descriptive. I know what an adult means when they say that, but I don't want her to misinterpret that.” 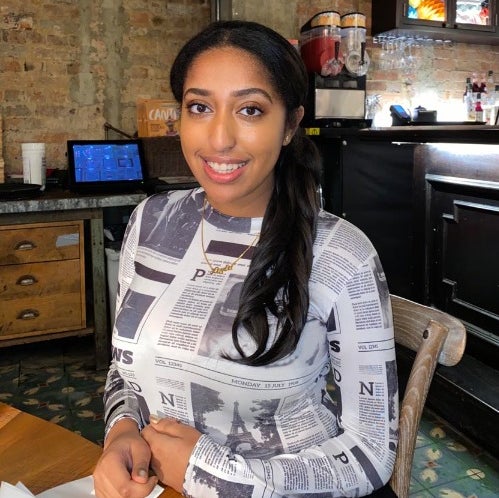 Khloé Kardashian has opened up about how she handles the subject of body image while raising her 3-year-old daughter, True.

In a new interview with Health magazine, Khloé discussed her approach to instilling body positivity in True, while also touching on her own relationship with body image and food.

When asked about her approach to staying well, Khloé — who has previously been vocal about the “unbearable” scrutiny she’d faced for years over her body — said that she works to practice “healthy habits on a daily basis.”

“I have to think of it as a lifestyle rather than thinking, ‘I want to try this diet or some other thing someone was talking about,’” Khloé said. “I’m so over that stage in my life. It's cliché, but it's all about mind, body, and soul. If I am not mentally strong then I physically feel like I can't do what I want to do. So, it is really not about the physical appearance.”

The Keeping Up With the Kardashians star went on to speak about navigating Instagram — which she described as both a “gift” and a “curse” — and how she handles receiving negative comments about her body on the platform.

"There's been so many days that I'm like, I feel so badass and good," she said. "And then my demeanor will be shot down because someone posted a story about how they perceive me or how they think I look."

“It's so strange because we know the truth about ourselves,” she continued. “So why let what someone says affect you? But it does. It didn't when I was younger. Normally, when you're older you turn into titanium. Sometimes I let that stuff get to me, and I have to actively drown that noise out.”

Speaking about her past relationship with food, Khloé opened up about how she was an “emotional eater” and revealed she’d “almost punish” herself for bingeing when she was younger.

“I’ve actually always had a really unhealthy relationship with food,” she said. “When I was younger and was sad, I would eat — I was an emotional eater. And then I hated the way I felt after that. I was almost punishing myself for bingeing or having a bag of chips — it just became so much thought.”

“I had tried every diet under the sun,” she continued. “Remember when Beyoncé did that lemon juice and cayenne pepper thing? I was like, ‘Sign me up!’ That's why I yo-yoed my entire life — I was always chasing some fad.”

“When it comes to food — I had so many issues,” she said. “It wasn't from one person, I guess just from society or how people critiqued my body.”

“When I started working out, I decided to make some lifestyle changes,” she added. “So I'd say, for example, this week I am just going to do one thing — I'm just going to cut out sugar. Then, maybe I'd try to do it for a month. After that, I'd try to incorporate another healthy change.”

Khloé then went on to talk about how she’s conscious of safeguarding True, in light of her own longtime struggle with body image.

“I don't play when it comes to True,” Khloé said. “She's very tall. People will always say, ‘She's so big.’ And I'll say, ‘Oh, she's so tall.’ I try to make them be more descriptive. I know what an adult means when they say that, but I don't want her to misinterpret that.”

“I’ve noticed she’s really tough, which is a great thing,” she said. “And if that's who she is, I'm not trying to make her not be that way… I do try to always tell her that it's OK if she cries or if something is wrong.”

Khloé's comments come just months after she discussed the other deliberate parenting choices she's made, including her decision to educate True on race while "still educating [herself] at the same time."

“I do want [True] to be exposed to as much inclusion, but variety as possible,” Khloé said in a guest appearance on the Role Model podcast. “I don't want her living in a bubble, because we do have this very privileged life, and I want her to know all types of life and all types of living and be very aware of that.”

“I know some people get uncomfortable with talking to their kids about race,” she went on. “Or they think, ‘Oh, we live in a bubble. We never have to address that my child is Black.’ I mean, of course you do! You're only setting them up, I think, for failure if you don't talk about race and probably the things that they're going to endure once they're in, quote, the ‘real world.’”

“Even if you do live in a bubble, whoever you are, I think that can be really jarring then when your kids are set free, then they're going to be so either devastated, hurt, traumatized, confused, overwhelmed,” she added.

And Khloé also said that she and some of her sisters are able to have conversations about navigating race together, as they’re in a similar position with their own children.

“The beauty of having some of my sisters in the same situation is we get to have those conversations probably together,” she said.

Khloe’s remarks on race seemed to mark a shift in her views toward the topic, since roughly three years prior she received intense backlash for saying that she “doesn’t see color” in response to racist comments directed at True on Instagram.

Addressing the racist comments at the time, Khloé shared a thread of tweets explaining how she'd like to educate others by sharing her viewpoint — which many fans initially praised her for.

I dislike the fact that people are allowed to comment on my daughters skin color but as soon as I comment kindly back and praise her for all that she is, the comment gets erased. If you have the courage to post your nasty criticism please allow one to defend or comment back

However, after Khloé went on to tweet that they “do not see color” in her household, she received harsh criticism for her “ignorant” mindset, as well as advice from fans on how to productively navigate the topic of race.

@narcicismo I try to put myself in their shoes &maybe they were brought up in a different type of household then I was. So instead of shaming I try to educate. In our household we do not see color. We see emotion and action. We see love. We feed off of energy

“'We do not see color' is damaging,” one person tweeted at Khloé. “The world sees color, what needs changing is the racist ideas that lighter is better. [True] needs to grow up knowing she’s a strong, beautiful, woman of color.”

@khloekardashian I think your daughter is beautiful and it’s disgusting ppl come at her but saying, “we do not see color” is damaging. The world sees color, what needs changing is the racist ideas that lighter is better. She needs to grow up knowing she’s a strong, beautiful, woman of color.

“If you don’t see color then you don’t see your child,” tweeted another. “The fact is that so much of who she is and will be is wrapped up in her skin color. The world will treat her differently because of it and you have a duty to prepare her for [it].”

@khloekardashian @narcicismo If you don’t see color then you don’t see your child. The fact is that so much of who she is and will be is wrapped up in her skin color. The world will treat her differently because of it and you have a duty to prepare her for if.

However, Khloé’s approach appeared to shift last summer, after she released a statement on Instagram, opening up about how she could no longer “sit silently” regarding issues of racial injustice. Her post came days after the initial resurgence of the Black Lives Matter movement.

“It breaks my heart to think about parents having to teach their children how to stay alive. ... No mother should live in fear like that, and as I think about my own daughter, my future children, and all of our children, I know we have to create a better future for them,” Khloé wrote in her statement.

“I vow to continue to teach my daughter every single day, and with every opportunity I get, to have love for others, regardless of the color of their skin, their sexuality or their religious beliefs.”

Read The Rest at
buzzfeednews.com

Jonah Hill Asked Fans Not To Post "Good Or...

People Are Calling Out The Celebrities Who...