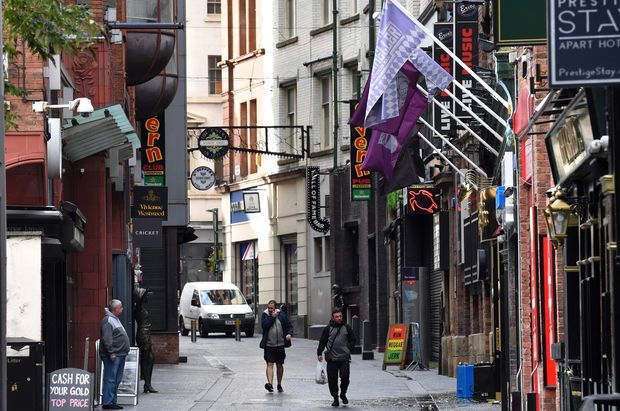 People walk along an almost empty street in Liverpool, northwest England on October 14, 2020, as new local lockdown measures come in to help stem a second wave of COVID-19.

U.K. blue chips on Thursday were on course for their worst single-day performance in three weeks, hit by the twin impact of the fading possibility of U.S. stimulus and increased restrictions on mobility in the wake of a second wave of coronavirus cases.

“In general, these restrictions will sacrifice some level of economic activity so that the spread can be contained. Market participants appear to have not discounted this scenario, despite the possibility of a second wave for months,” said Charles Campbell, managing director at MKM Partners.

News over a lack of U.S. stimulus also put a cloud over markets. Treasury Secretary Steven Mnuchin conceded there was only a slim possibility of a deal as he criticized his counterpart in talks, House Speaker Nancy Pelosi.

For now, markets seem relatively unconcerned about the state of U.K.-European Union negotiations on a trade deal. Thursday marked the U.K.’s unofficial deadline for striking a deal, but the two sides are continuing to talk.

Just Eat Takeaway JET, +1.76% was one of the few advancers, edging up 1% on the possibility of increased business from consumers forced to stay at home.

Pub chain Marston’s MARS, -4.95% fell 4% after saying it may cut up to 2,150 jobs due to new restrictions in cities including Liverpool.