The Dow Jones Industrial Average on Tuesday was knocking on the door of a psychologically significant 30,000 milestone, which would mark the first such round-number record level for the benchmark since mid January as the stock market attempts to punch higher in the wake of the volatility inspired by the COVID-19 pandemic.

The blue-chip index carved out an intraday record peak at 29,996.17 on Tuesday, putting the index a stone’s throw from the round-number level.

The Dow has traversed 216 trading days since hitting an important milestone at 29,000 on Jan. 15, but has struggled over the past several months as concerns about the viral epidemic has delivered an outsize hit to the large-capitalization gauge.

The Dow’s DJIA, +1.32%, on Tuesday, was sparked by further news of progress on an effective remedy for COVID-19 and progress toward a transition to the presidency of former Vice President Joe Biden. 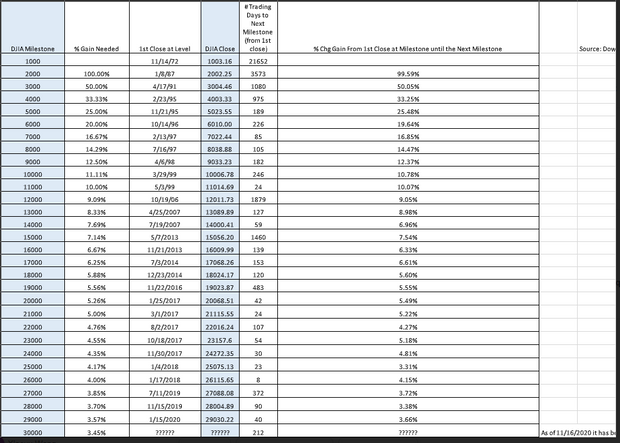 Gains this week for the Dow come were mostly fueled by fresh reports on progress toward a vaccine, with the University of Oxford and AstraZeneca saying their coronavirus vaccine candidate was found to have as much as a 90% efficacy rate in preventing infections without serious side effects in a late-stage trial

To be sure, round numbers like 30,000 aren’t necessarily significant for investors, but they can help to reflect growing upbeat sentiment, despite a number of risks that still face investors, including the resurgence of COVID-19 in parts of the world and concerns about how best to distribute the vaccine candidates when they are authorized to be used widely.

It is also worth noting that the higher the Dow rises, the smaller each 1,000-point move is in percentage terms, but individual investors have tended to pay close attention to the Dow when it carves out fresh milestones.

In company-specific terms, since hitting 29,000, Apple AAPL, +1.05% has been the largest contributor to the Dow’s rally, adding more than twice any other component over the past 10 months. The Dow is price-weighted, so the stocks that have the highest price tend to be the most influential. However, Apple’s share price was split four-for-one at the end of August, shifting it from the most influential Dow component on a price basis to the middle of the pack.

At around $113, as of Tuesday late-morning, Apple’s shares rank 22nd in terms of price among the Dow’s 30 components.

Still, according to Dow Jones Market Data, Apple has added 1,300 points to the Dow since the gauge hit 29,000, while UnitedHealth Group UNH, +0.64%, which is now the blue-chip member with the richest price at about $338, has added over 400 points to the point-weighted index. 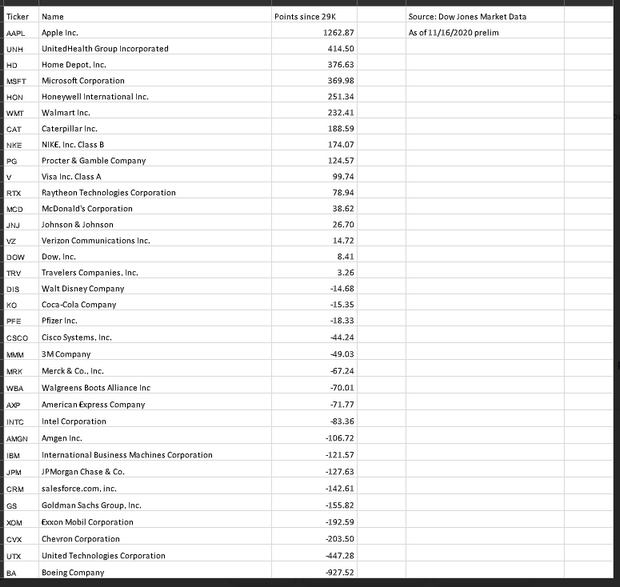