Washington — Citing a continued decline of border apprehensions by American officials, Mexico's top diplomat on Tuesday touted his government's efforts to stem the flow of migrants trying to the reach the U.S. and cast a "safe third country" agreement between both countries as unnecessary and politically untenable.

"The Mexican strategy has produced important results," Foreign Minister Marcelo Ebrard said in Spanish during a press conference in Washington. "The trend is irreversible," he added later, referring to the drop in apprehensions along his country's border with the U.S. 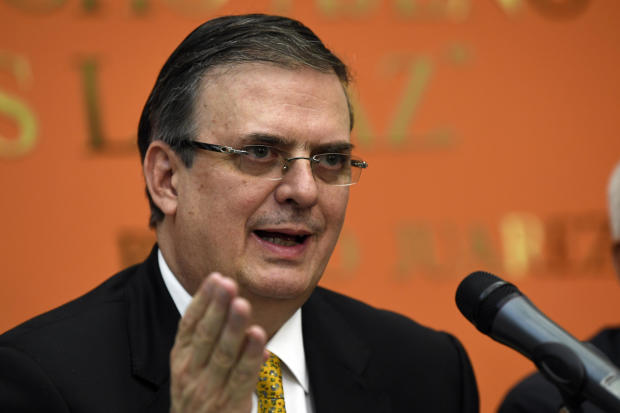 Mexican Foreign Minister Marcelo Ebrard speaks during a news conference at the Embassy of Mexico in Washington on Tuesday, September 10, 2019. Susan Walsh / AP


Before briefing reporters, Ebrard and his delegation met with Vice President Mike Pence, Secretary of State Mike Pompeo, Acting Homeland Security Secretary Kevin McAleenan, White House senior adviser Jared Kushner and other top U.S. officials to evaluate the agreement both sides forged in June to curb migration to the U.S. He said the meeting was long and productive, portraying it as starkly different than a press briefing held by Acting Customs and Border Protection (CBP) Commissioner Mark Morgan on Monday to unveil the number of border apprehensions in August, the third consecutive month that has seen a drop.

"The meeting transpired in friendly terms, nothing like what we saw yesterday from CBP — which, for us, was unacceptable," Ebrard said, referring to Morgan's calls for Mexico to "do more."

Ebrard said both McAleenan and President Trump, whom he spoke to briefly after the meeting, asked him about his government agreeing to a "safe third country" accord, which would require most migrants traveling through Mexico to seek asylum or some form of protection there, instead of in the U.S. Under economic pressure from the Trump administration, the Guatemalan government has already consented to a similar controversial agreement that has yet to be ratified by the legislature there.

But Ebrard said he told U.S. officials that neither his government or the Mexican Senate would agree to such a deal, stressing that he believes the two sides have accomplished "90%" of the goals they outlined in June, when Mr. Trump was threatening to impose tariffs on Mexican goods unless Mexico did more to stem the flow of migrants.

Since then, Mexico has bolstered its immigration enforcement, deploying newly formed National Guards units and other officials to its southern border with Guatemala. The government there has also worked with U.S. officials as the Trump administration expands the controversial "Remain in Mexico" program, which has forced more than 42,000 asylum seekers to wait in northern Mexico for months until they are temporarily allowed into the U.S. to attend their court hearings.

Ebrard did not address any commitments Mexico may have made on the "Remain in Mexico" program. But the White House said in a statement that the two sides agreed to work together to expand the controversial program "to the fullest extent possible." A spokesperson for the Mexican government did not respond to an inquiry into Mexico's commitments regarding the MPP policy.

Although he discarded any notion of his government signing a "safe third country" agreement, Ebrard noted that the deployment of National Guard units for immigration enforcement purposes is a permanent assignment.

He also urged the U.S. to match his government's efforts to foster economic opportunity in Guatemala, Honduras and El Salvador, saying Mexico is hoping to create about 60,000 jobs in the so-called Northern Triangle though investments. Mr. Trump this year instructed the State Department to cut most future foreign aid to groups working to quell the rampant poverty and violence in these countries, faulting the governments there for not doing enough to prevent their citizens from leaving.

Asked whether Mexico was effectively succumbing to Mr. Trump's tariffs threats without getting any concessions from the U.S., Ebrard tried to downplay the potential levies, saying the possibility of the U.S. imposing them is more remote now. He said every action Mexico has taken in light of the June agreement with the U.S. has been in accordance with Mexican law.

"We haven't done anything to be ashamed of," he said. "We would never do that."