Johannesburg — Demonstrators stayed off the streets of Lagos, Nigeria, on Saturday morning after a brutal week where government forces were accused of fatally shooting protesters who were demonstrating against police brutality.

The shootings have ignited international outcry and a nationwide movement for social change. Amnesty International reported that soldiers opened fire on demonstrators, killing at least 12 people. This alleged suppression of a peaceful demonstration has only served to increase the anger of Nigerians of all ages who continue to take to the streets.

"We are here because we believe in what we are fighting for. We are here to defend our unity," one protester said.

More than two weeks ago, tens of thousands of Nigerians began demanding the disbanding of the Special Anti-Robbery Squad, a controversial police unit known as SARS. There are striking similarities with protests across the U.S. that followed George Floyd's death in police custody. Commentators have been quick to point out that police brutality flourishes when law enforcement protects the interests of the powerful.

"Once you're not a community resource and you have authority over people and you have no accountability structures, you then create an environment where bad people do bad things with that power," said Zibusiso Wayne Ncube, the head of strategic litigation at Lawyers for Human Rights. 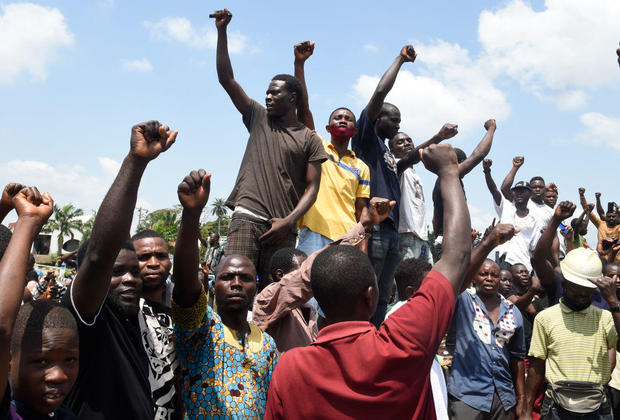 Protesters chant and sing solidarity songs as they barricade an expressway in Magboro, Ogun State, on October 21, 2020. PIUS UTOMI EKPEI/AFP via Getty


Nigerian President Muhammadu Buhari promised to disband SARS over a week ago, but it was too late. Fed up with years of corruption and a lack of accountability, protesters have turned this into a far bigger crisis for Buhari's government.

Police brutality is not the only issue fueling the anti-government sentiment. The misuse of emergency government COVID-19 funds and a stagnant economy crippled by the pandemic have become a major focus of popular anger.

Choose Between These 20 Sweet And Salty Foods...

Mariah Carey's "Save The Day" Video...