A quarter-pound of beef, fresh leaves and 15 live giant land snails — it's not a recipe, but the confiscated contents of an airline passenger's luggage earlier this month. U.S. Customs and Border Protection announced the discovery Tuesday, saying that the snails are capable of causing rare forms of meningitis in humans.

CBP said in a statement that the snails were recovered at the George Bush Intercontinental Airport in Houston, Texas. The passenger who brought the giant land snails, also known as banana rasp snails, was traveling from Nigeria. She initially only declared that she had brought dried beef with her, but later added the snails to her declaration, CBP said.

Agriculture specialists who were inspecting the passenger's luggage in Houston then found three zip-locked plastic bags that had the live snails inside, along with fresh leaves and about 0.25 pounds of beef, CBP said.

"Our agriculture specialists remain vigilant in protecting the U.S. from foreign animal and plant disease that could threaten U.S. crop production and livestock industry or be transmitted to humans," Houston CBP port director Shawn Polley said in a statement. 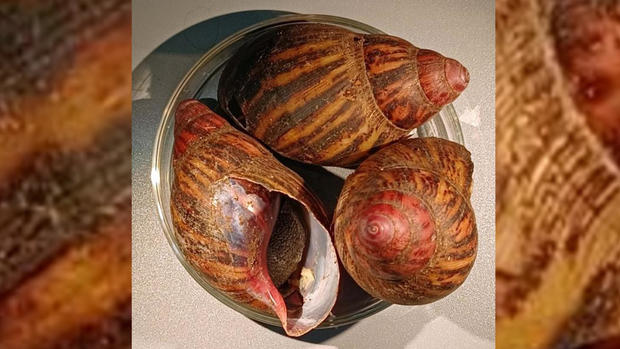 An image of the various live giant land snails that were seized at the George Bush Intercontinental Airport in Houston. U.S. Customs and Border Protection

The USDA has taken control of the snails, and said on its website that it is "one of the most damaging snails in the world." It can grow to be almost 8 inches in length and 5 inches in diameter, about the size of an adult's fist, the USDA said.

Giant land snails pose a "potentially serious threat" to humans and the environment, CBP said. Along with negatively affecting agriculture and ecosystems, the West Africa natives are known to carry a parasite called the rat lungworm that can cause rare forms of meningitis in humans.

More than 2,800 cases of the disease have been reported from 30 countries, according to the Centers for Disease Control and Prevention. The parasite doesn't survive for long within the human body, the CDC said, and serious complications, such as neurologic dysfunction or death, rarely occur.

Tokyo Olympics to kick off under shadow of...

"Atypical's" Casey And Izzie Are The Most Wholesome Queer Couple, So Here's An Appreciation Post
5

Here Are 15 Very Iconic Actors, But What Is The One Movie You Always Associate With Them?