Overseas vote could double as anxious Americans mail in ballots

London — Nearly 3 million U.S. citizens living overseas are eligible to vote in this year's presidential election. Already there are clear indications of a massive turnout from these expats, who are taking advantage of a long-established international absentee ballot system — but  with some extra anxiety

As CBS News senior international correspondent Elizabeth Palmer notes, Americans don't even have to be on the planet Earth to cast their votes. U.S. astronaut Kate Rubins, who blasted off last week for the International Space Station, will cast her absentee ballot with a little help from NASA Mission Control.

"I think it's really important for everybody to vote, and if we can do it from space, then I believe folks can do it from the ground, too," she said.


That's exactly what Alex Colton is doing, from her home in London.

"I feel like every vote counts," she told Palmer, noting that she "would certainly hope" her individual ballot could make a difference in her home state of Georgia.

Absentee voting is nothing new for U.S. expats. The system has run smoothly for decades. But this year, demand is through the roof, according to Susan Dzieduszycka-Suinat, who runs the non-profit, non-partisan U.S. Vote Foundation, which helps American nationals overseas register and vote.

"As so many different crises hit the U.S., overseas citizens became more and more aware of what was going on and wanted to participate," she told Palmer. "Our sentiment is that, in regards to 2016, it will probably be about double" the number of overseas votes cast this year.


The trend was already headed upward. According to official data from the U.S. Federal Voting Assistance Program, the 2018 midterm elections saw an increase of about 30% in ballots sent from Americans abroad.

But the most bitterly contested election in decades has U.S. expats feeling some stress.

Janet Fisher, from New York, read and re-read the instructions for the ballot and official envelope she printed at home.

"If it wasn't 100% perfect I thought they would discount my vote, and I feel very passionate about voting in this particular election," she told Palmer.

Michigan native Erin Stacer, also casting her ballot from the U.K., said she paid the extra money to mail her ballot with tracking and a required signature. She will be able to follow its progress via a postal service website, "so I'll be able to refresh everyday until I see that it's been signed for."

Until then, it will be a nervous wait.


Susan Mumford is registered to vote in Arkansas, and she said having received her official absentee balloting materials at her home in Britain made her "feel a lot better about the current voting situation."

Alex Colton's ballot should have come by mail, too, but it didn't.

"I've spoken to two other Americans as well that have been living here, and they didn't receive theirs either. So, lost in the mail? I'm not sure," she told Palmer.

She was able to register online and then print out an official ballot, but the experience did shake her faith.

"I do feel more skeptical than I have in the past," she said. But asked if she would go ahead and mail in her ballot despite her misgivings, she didn't hesitate: "Of course I am."

The expat advocacy group American Citizens Abroad told CBS News it had heard from voters who sent in their ballot requests weeks ago, but still hadn't received any confirmation. The organization wrote a letter to Congress and the Trump administration, urging both to take extra precautions to ensure those votes are counted.


President Trump has personally raised the specter of large-scale fraud associated with mail-in ballots, but Dzieduszycka-Suinat said that in her experience, there's little cause for concern — at least with votes from abroad.

"If he sat in my shoes, he would know that in 16 years, I have not even one time heard of a single case, or even an accusation, of fraud with any overseas or military voter," she told Palmer. "I think that as overseas voters, we have the most benefits of any U.S. voters available at our fingertips — so much of it is online. It's really been modernized. It's uniform across the states, and it's a point of bipartisan consensus in Congress."

Still, some Americans have clearly been rattled by changes to the U.S. postal service, allegations of fraud — including from the president himself — and, of course, COVID-19. It's driven some in the U.K. to make a trip to the U.S. Embassy in person, where a special mailbox in the lobby has been set up just for the purpose.

Patricia Wynn was among them. She said it just felt "more secure here than going through the post." 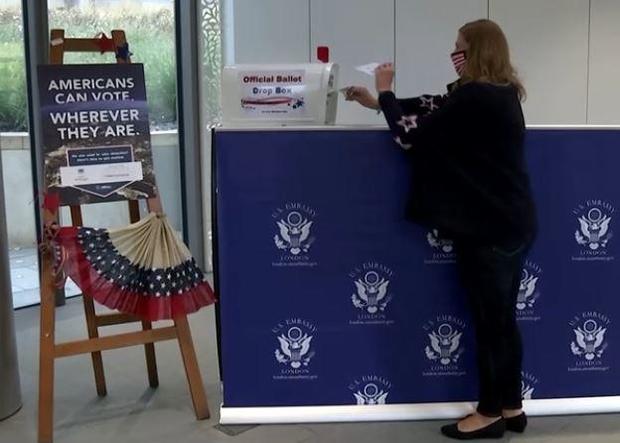 Patricia Wynn wears a protective mask as she casts an early ballot for the U.S. presidential election at the U.S. Embassy in London, England, October 13, 2020. REUTERS/Hannah McKaynn


Asked if she was still confident her ballot will be counted, Wynn said it was "really worrying that we actually start to question these institutions and we are worried about things like whether our vote will count."

The overseas votes could be decisive in battleground states, and that's spurring expat voters on.

"I'm about to send in my ballot, hope it gets there on time. Going to Plymouth, Michigan," Stacer said in a selfie video she shot as she mailed her vote. "It's got about four stamps on it. I just hope it makes it through the U.S. postal system and is actually counted at the other end."

"I've done my duty," Colton told CBS News as she stuck her own completed ballot in a London mailbox this week. "It's gone into the universe, and my fingers are crossed."

A green puppy was born in Italy