Mount Vesuvius erupted and destroyed the ancient Roman city of Pompeii nearly 2,000 years ago, but archaeologists are still finding new artifacts from the tragic event. Their latest discovery includes two bodies that appear to belong to a wealthy individual and his slave.

Officials at the archaeological park in Italy said Saturday that archaeologists have unearthed skeletal remains of two men attempting to escape death the eruption. Researchers found parts of the skulls and bones while excavating the ruins of what was once a large villa with views on the Mediterranean Sea, located on the outskirts of Pompeii.

The bones were found at Civita Giuliana, the same area where archaeologists excavating a stable dug up the remains of three harnessed horses in 2017, officials said. 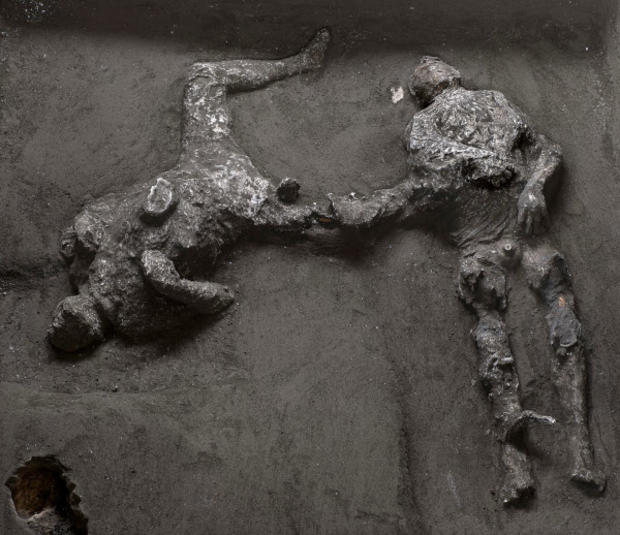 The two men died during the so-called second pyroclastic flow, which occurred after the initial eruption.  Pompeii site


The first victim was determined to be a young man, between the ages of 18 and 25, who stood at a little over 5 feet tall. Unusual vertebral compressions indicated that he took part in hard manual work, leading researchers to believe he was a slave.

He wore a short tunic made of wool fibers.

The second victim was found with his head face-down, arms folded with hands on the chest, legs spread apart and knees bent. The body position is similar to other casts seen at Pompeii, officials said.

Researchers believe the man was older than the other victim, between the ages of 30 and 40, and about 5 feet 3 inches tall. He wore much more intricate clothing.

Once archeologists carefully removed the bones, officials made casts of the two victims, who were found in a hallway in the "noble" part of the villa, in a layer of ash at least 6.5 feet deep. 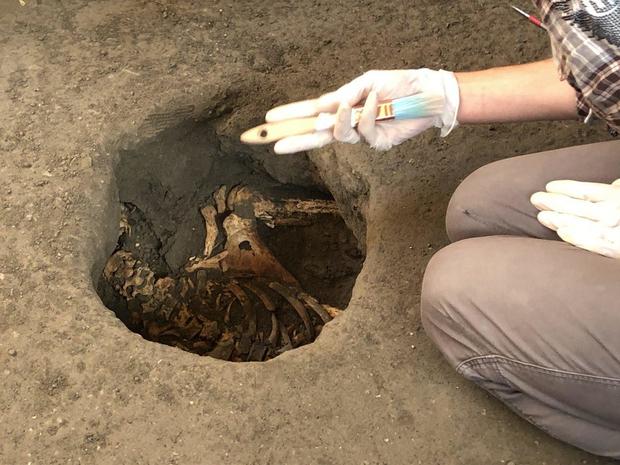 Once the bones were removed, officials made casts of the two victims.  Pompeii site


The technique was first pioneered in the 1800s to preserve the victims in the positions in which they died.

According to officials, both men died suddenly "during the so-called second pyroclastic flow" that occurred after the initial eruption, but was nevertheless extremely violent. This second flow killed survivors who were attempting to escape their dwellings during the estimated 30 minutes of quiet after the initial destruction.

"The flow that struck was however very fast and very violent, bringing down the first floors of the houses and surprising the victims as they attempted to escape across a few centimeters of ash, leading to their deaths," officials said. "In this case it is probable that the pyroclastic flow flooded the room through several openings, entombing them in the ash."

It's Time To Decide If You're Ice Cream Or...