A fire pushed up a high-rise apartment building by strong winds in a South Korean port city left scores of people with mostly minor injuries, officials said Friday. Early footage from the scene in Ulsan showed a huge ball of orange flame soaring up the 33-floor building and shooting through the roof as crews tried to put it out from below.

The Yonhap news agency in South Korea said the fire was "under complete control" Friday morning after firefighters spent nearly 16 hours battling it.

There were no immediate reports of any deaths.

Hundreds of residents evacuated as the fire broke out while workers rescued many who escaped to the roof or other spaces. 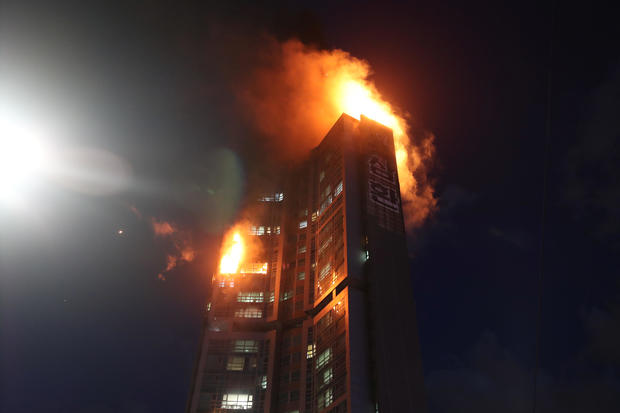 A mixed-use high-rise residential building is engulfed by a fire in Ulsan, South Korea, on October 9, 2020.  YONHAP NEWS AGENCY / REUTERS


South Korea's Ministry of the Interior and Safety said at least 88 people were treated for minor injuries such as scratches or lightly inhaling smoke. Yonhap put the number of injured at 93, including three who were seriously hurt. 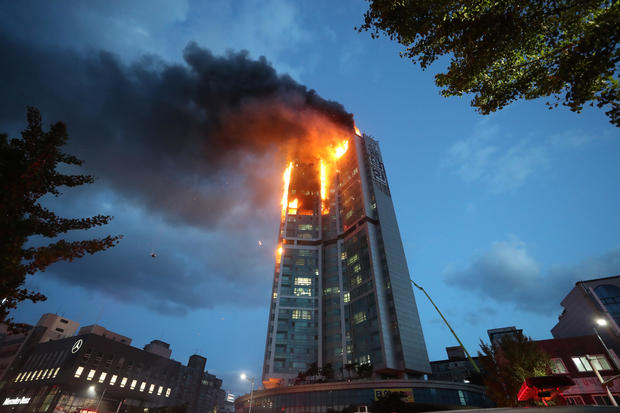 A mixed-use high-rise residential building is engulfed by a fire in Ulsan, South Korea, on October 9, 2020.  YONHAP NEWS AGENCY / REUTERS


Officials are investigating the cause of the fire, which they said started at a balcony in one of the lower floors late Thursday and spread up the exterior of the building amid strong winds.

Witnesses also said the building's exterior walls's insulation appear to have also aided the fire's spread, according to Yonhap.