The chief suspect in a double stabbing in Paris told investigators he carried out the attack in anger over caricatures of the Prophet Muhammad recently republished by satirical weekly Charlie Hebdo, a judicial official said Saturday. Two people were wounded and seven people are in custody after Friday's attack with a meat cleaver outside the newspaper's former offices in eastern Paris, which counterterrorism authorities are investigating as an Islamic extremist attack.

Charlie Hebdo lost 12 employees in an al Qaeda attack in 2015 by French-born extremists who had criticized the prophet cartoons. The newspaper, which routinely mocks religious figures of all kinds, decided to republish the caricatures the day before the trial into the 2015 attacks opened earlier this month. The publication drew threats from militant groups as well as criticism from Muslims in multiple countries.

Questioned by investigators, the chief suspect acknowledged carrying out the attack and said he sought to target Charlie Hebdo because of the caricatures, according to an official close to the investigation who wasn't authorized to be publicly named discussing an ongoing investigation.

The suspect had been arrested a month ago for carrying a screwdriver, but wasn't on police radar for Islamic radicalization, Interior Minister Gerald Darmanin said. He said the screwdriver was considered a weapon, but did not explain why. 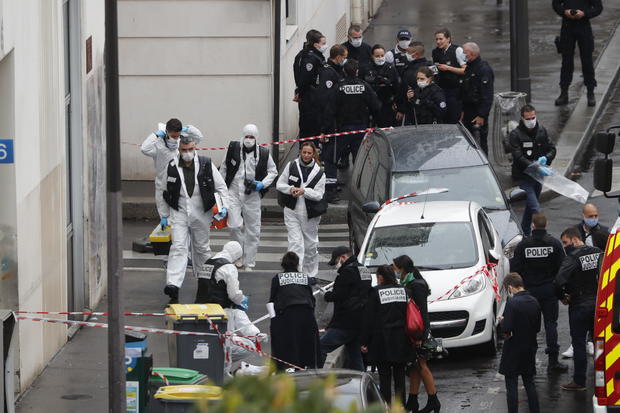 Police officers gather in the area of a knife attack near the former offices of satirical newspaper Charlie Hebdo, Friday Sept. 25, 2020 in Paris.  Thibault Camus / AP


The suspect arrived in France three years ago as an unaccompanied minor, apparently from Pakistan, but his identity was still being verified, the minister said.

The two people wounded in Friday's attack were a woman and a man working at the Premieres Lignes documentary production company who had stepped outside for a smoke break. Company co-founder Luc Hermann told broadcaster France-Info that they remain hospitalized Saturday, but their condition was "reassuring."

Prime Minister Jean Castex, visiting Paris police headquarters Saturday, pledged to step up the fight against terrorism, saying "the enemies of the republic will not win."

The interior minister conceded that security was lacking on the street where Charlie Hebdo was once headquartered, and ordered special protection for all "symbolic sites," noting in particular Jewish sites around the Yom Kippur holiday this weekend. A Jewish grocery store was targeted days after the Charlie Hebdo newsroom massacre, in what authorities say were coordinated attacks.

15 Children's Movies That Are Actually Super...

Joaquin Phoenix And Rooney Mara Have "A...