Home /
Business /
Markets /
The Margin: Good news: Thanksgiving dinner is the cheapest it’s been in 10 years

The Margin: Good news: Thanksgiving dinner is the cheapest it’s been in 10 years

While the pandemic is transforming the way many people will be celebrating Thanksgiving this year, here’s one change to be thankful for: the cost of buying the turkey and the trimmings to feed your family is the lowest it’s been in 10 years.

And the 35th annual survey finds that this year’s feast will run $46.90 on average, or less than $5 per plate, which is $2.01 cheaper than last year’s average of $48.91. In fact, the Farm Bureau’s Thanksgiving shopping list this year is the cheapest that it’s been since 2010.

Why? Because the turkey isn’t gobbling up nearly as much of the budget as it has in the past. 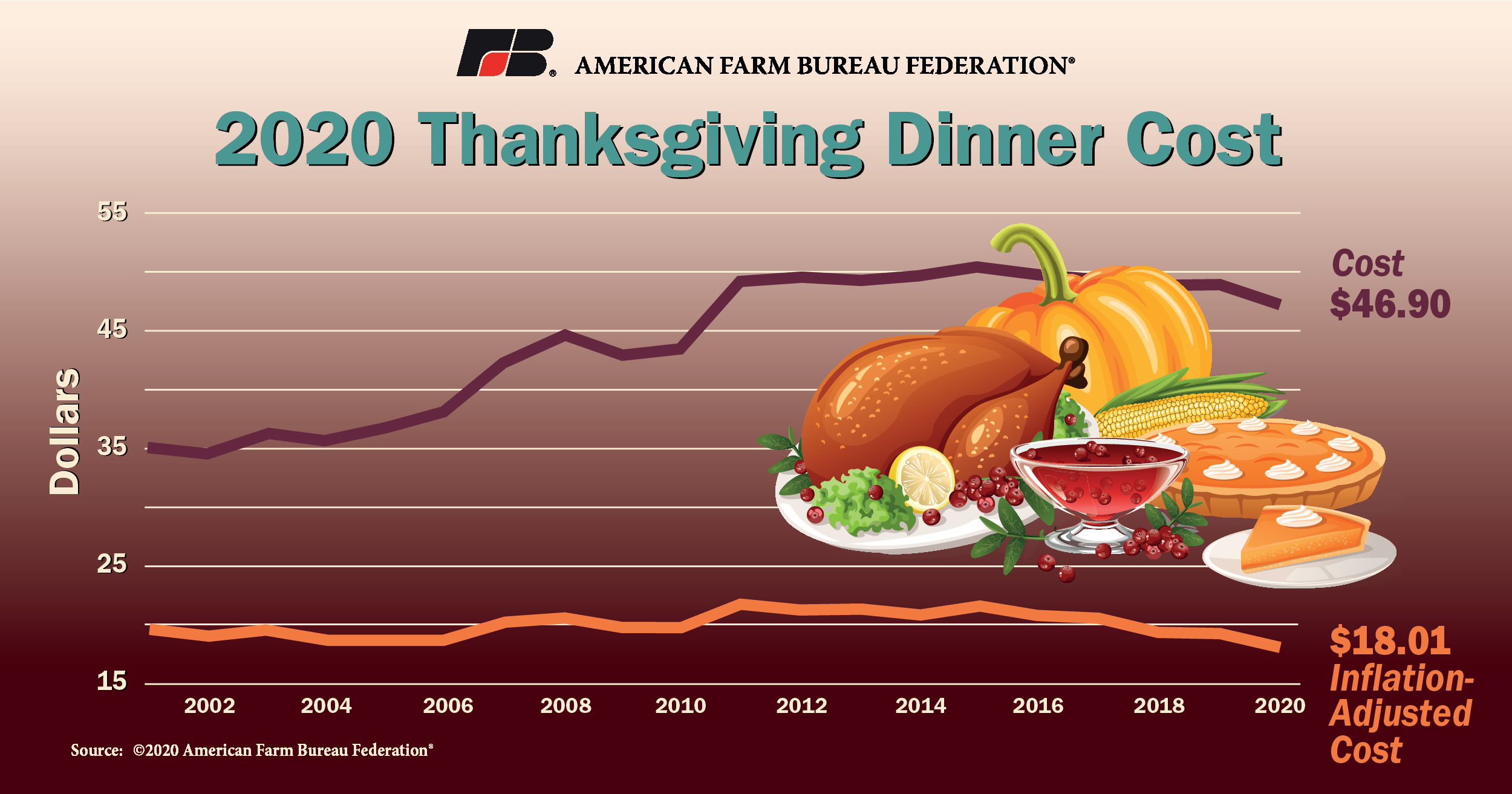 “Pricing whole turkeys as ‘loss leaders’ to entice shoppers and move product is a strategy we’re seeing retailers use that’s increasingly common the closer we get to the holiday,” explained the Farm Bureau’s top economist, Dr. John Newton, in a statement.

That’s because some people are scaling down the size of their holiday dinners this year as health officials including the U.S. Centers for Disease Control and Prevention (CDC) strongly urge Americans to avoid traveling or visiting with friends and extended family for Thanksgiving this year as COVID-19 cases and hospitalizations have surged across the country.

So now smaller turkeys for smaller gatherings are in high demand — and they are increasingly hard to find. So it’s not surprising, then, that retailers would offer discounts on turkeys to encourage shoppers to buy bigger birds anyway — and enjoy a lot of leftovers.

As a result, turkeys are available for roughly $1.21 a pound by the Farm Bureau’s calculations, which is down 7% from least year, meaning a 16-pound bird will run about $19.39 on average.

Shoppers will be shelling out less for sweet potatoes and whipping cream this year, as well, which are 31 and 34 cents cheaper, respectively. But they’ll fork over slightly more for cubed stuffing (13 cents higher) rolls (16 cents higher) and pumpkin pie mix (7 cents more).

Keep in mind that shoppers could spend significantly more in expensive metros like NYC or San Francisco, of course, and bagging organic products could also drive up the cost.

But bargains can certainly be found by shopping around. The German grocery chain Aldi has boasted that shoppers can find everything they need for Thanksgiving for just $30 this year, including a Butterball SEB, +1.39%   turkey, bagged stuffing, sweet potatoes, Hawaiian sweet rolls, frozen peas, fresh cranberries, carrots, celery, canned pumpkin pie mix, pie crust, whipped cream and a gallon of whole milk.

The Farm Bureau calculated the cost of this year’s Thanksgiving dinner by drawing on more than 230 surveys featuring pricing data from all 50 states. Farm Bureau volunteer shoppers also checked prices online using grocery store apps and websites, because more folks are shopping online during the pandemic. And these volunteer shoppers looked for the best possible prices without using special promotional coupons or purchase deals, meaning you can certainly take advantage of these kinds of discounts while doing your own shopping.

Despite health officials asking Americans to stay home for the holiday, AAA, formerly known as the American Automobile Association, estimates that 50 million people will travel over the “Thanksgiving holiday travel period,” a five-day stretch from Wednesday, Nov. 25 to Sunday, Nov. 29.

What’s more, most Americans say they will ignore the CDC’s advice and host non-household members for Thanksgiving anyway, according to Nielsen, although 70% of them will be feeding six people or less.

If you absolutely must travel for Thanksgiving despite the CDC guidance, here are some ways to reduce the risk of either contracting the virus or spreading it to your friends and family.

Or if you find yourself suddenly throwing together a smaller Turkey Day dinner at the last minute, here are 16 ways to get your ingredients together — including online and contact-free options.

Everything You Should Be Baking For...

Russia claims it chased off a U.S. warship with a "ramming" threat
5