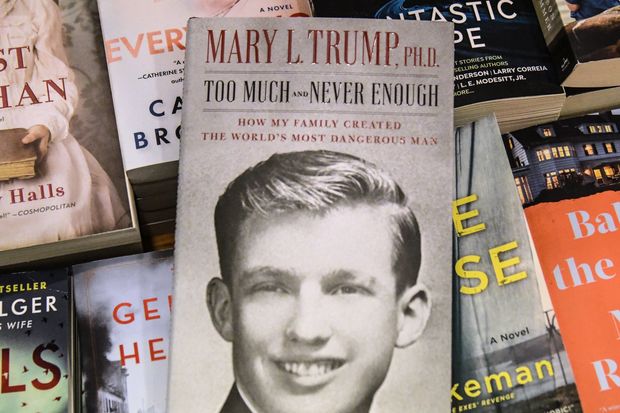 Simon & Schuster dominated the political conversation in 2020, publishing such bestsellers as Mary L. Trump’s memoir "Too Much and Never Enough."

ViacomCBS Inc. is close to a deal to sell book publisher Simon & Schuster to German media giant Bertelsmann SE for more than $2 billion, people familiar with the matter said, in a deal that would create a publishing behemoth accounting for about a third or all books sold in the U.S.

The transaction would put the publishers of some of the world’s bestselling authors including Stephen King, Bob Woodward, Dan Brown and John Grisham under the same corporate umbrella. Bertelsmann SE’s BTG4, -0.76% Penguin Random House already is the U.S.’s largest publisher by books sold, while Simon & Schuster is the third largest, behind News Corp’s HarperCollins Publishers.

The companies haven’t yet reached a final agreement, and it is possible the deal still could fall apart, the people said.

ViacomCBS VIAC, -0.31% put Simon & Schuster up for sale in March, saying it would use the cash proceeds to further invest in its streaming-video efforts. Viacom Inc. and CBS Corp. completed their merger in December 2019. The company earlier this year agreed to sell CNET Media Group for $500 million and is looking to sell “Black Rock,” CBS’s historic Midtown Manhattan headquarters.

Politics isn’t Janet Yellen’s forte, but it’s what she’s in for now.

Trader Joe's Beauty Advent Calendar Is Back And...

What's Worth Streaming: Here’s everything...