The 2020 hurricane season continues to overachieve, as tropical storm Zeta gets stronger over the Western Caribbean. The storm is expected to become a hurricane on Monday, taking a track similar to Hurricane Delta, striking near Cancun and then heading towards the Northern Gulf Coast. 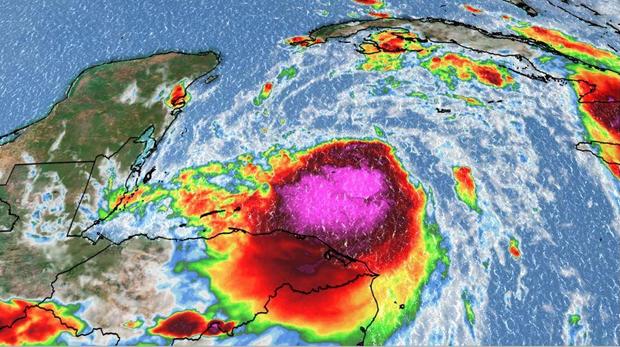 
Zeta is the 27th named system of the 2020 season, which is running over a month ahead of the record pace set back in 2005. That year featured 28 tropical storms, and the last did not form until the end of December. That puts 2020 well on track to either tie or break the all-time record for the number of named storms in the Atlantic in one season.

The 27th named storm of the 2020 Atlantic hurricane season.

On Sunday night, Zeta was slowly getting better organized just north of the coast of Honduras, south of Cuba. Maximum winds were near 50 mph and the pressure was steadily falling, indicating gradual strengthening. Computer models called for continued intensification because the system is located over the warmest pool of water in the hemisphere and upper level winds are becoming more favorable for development.

A reminder that #Zeta is over the warmest water in the Hemisphere. Shear is pretty strong on the outskirts of the storm envelope but there is a small area above the storm offering protection. Its enough for strengthening to a hurricane. Will be interesting to see just how much. pic.twitter.com/Tkbu4NanHT

By Monday, the official forecast from the National Hurricane Center predicts Zeta will be a low-end hurricane, but it is not expected to be nearly as strong as Hurricane Delta just weeks ago. The system will make landfall on the Yucatan Peninsula near Cancun and Cozumel on Monday night and Tuesday morning. Like Delta, it will weaken briefly over land.

On Tuesday, as the system reemerges over the waters of the Gulf of Mexico, it will gain a little of its strength back, likely regaining hurricane intensity and staying that way until Wednesday morning as it moves north. But on Wednesday, it should run into strong upper level winds as it nears the Gulf Coast, where the official forecast calls for slight weakening at landfall Wednesday afternoon. 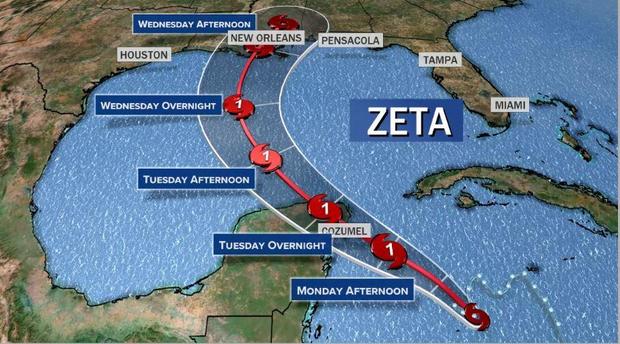 The National Hurricane Center's forecast cone shows landfall anywhere between southeast Louisiana and the western Florida Panhandle. This would be the 8th storm to make landfall along the Gulf Coast this season, with the highest concentration in Louisiana.

Here's a map of the amount of time spent in the 5-day NHC forecast cones so far in 2020.

Louisiana has had a cumulative of THREE WEEKS in the cone this year!

And now we have TD 28 tracking toward the same area. pic.twitter.com/dX4J9w6n2z

As of Sunday night, it appears Zeta will be a strong tropical storm or possibly a very low-end hurricane at landfall. The rule of thumb is that residents near the strike zone should always prepare for a category above what is forecast.

The 2020 season is the 5th season in a row with far above normal storm activity — the normal is 12 named storms. While science is not certain that the number of storms will increase because of human-caused climate change, signs do point in that direction. What is more certain is the number of intense storms will continue to increase as ocean temperatures continue to warm. 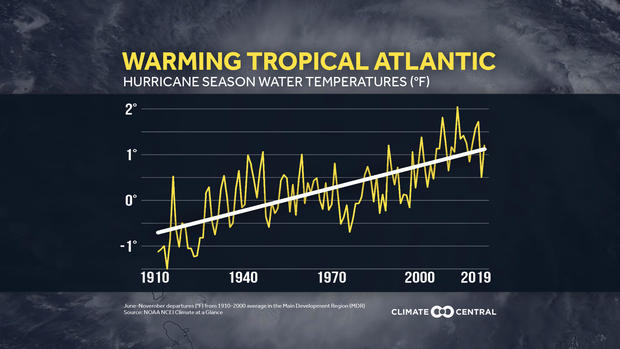 
In the Atlantic Ocean, the chance that any given storm will be at major hurricane intensity (Category 3,4 or 5) is now twice as likely than it was in the 1980s, showing just how influential warmer ocean waters can be.