Cities around the United Kingdom imposed new coronavirus restrictions Friday, as 6,874 new cases were reported – a new daily record, according to government data.

British officials said earlier this week that virus infection rates were heading "in the wrong direction." The U.K. government ordered a 10 p.m. curfew for pubs and restaurants, and heavy fines for people who violate quarantine and social distancing rules in an attempt to curb the spike.

Local lockdowns are now being imposed in several British cities where confirmed coronavirus infections have risen sharply. People in many communities can no longer socialize with other households, and across England, most gatherings are now limited to six people.

Leeds, a city of more than 750,000 in northern England, barred residents from meeting with members of other households either indoors or in private backyards. In the Welsh cities of Cardiff, Swansea and Llanelli, households also will be banned from mixing indoors. And in Scotland, students were asked not to go to bars and restaurants this weekend.

London, home to almost 9 million people, is being labelled an "area of concern." That means if infection rates rise, it could face new restrictions. 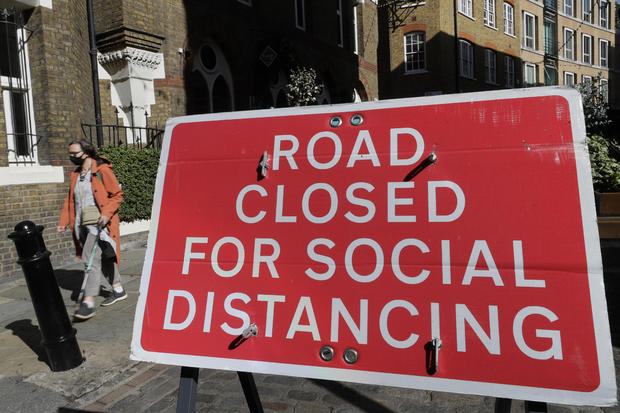 A sign is placed across a closed road in London, Thursday, September 24, 2020, after Britain's Prime Minister Boris Johnson announced a range of new restrictions to combat the rise in coronavirus cases in England. Kirsty Wigglesworth/AP


London's Mayor Sadiq Khan is urging the prime minister to ban household visits in the city. He blamed a shortage of virus testing capacity for rising infection rates there, saying that tests had been diverted away from the capital to other hot spots.

"London is at a very worrying tipping point right now. We're seeing a sharp rise in 111 calls, hospital admissions and patients in ICU,'' Khan said, referencing Britain's hotline for medical assistance. "The near collapse of test and trace and the resurgence of the virus means new measures to slow its spread were absolutely necessary.''

Meanwhile, the World Health Organization has warned of "alarming rates of transmission" across Europe. The WHO's regional director for Europe Hans Kluge said last week a September surge "should serve as a wake-up call for all of us."

Rat awarded medal for sniffing out dozens of...