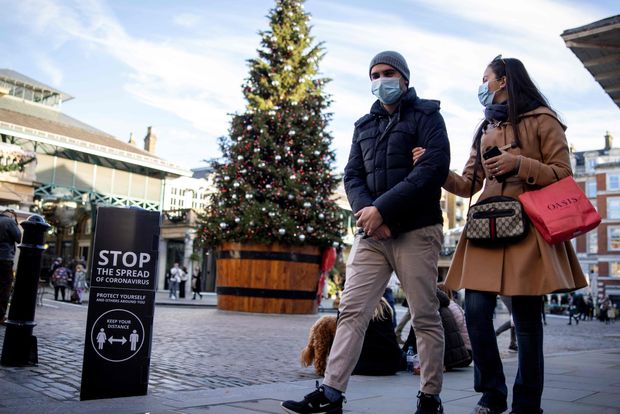 International arrivals to England will be able to reduce quarantine times with a private COVID test beginning Dec. 15.

Thinking of traveling to England for Christmas? You’ll soon be able to cut your quarantine period by more than half — but only if you pay up to £120 ($160) for a COVID test.

Under the U.K. government’s new “Test to Release” strategy, which comes into force on Dec. 15, passengers arriving from countries with high infection rates can cut their quarantine from 14 days to five, if they test negative for coronavirus on the fifth day.

Passengers who choose that option will need to book a test before travel and pay for it privately from a list of government-approved suppliers, with results usually provided in 24 to 48 hours. The tests are expected to cost between £65 and £120.

Read: How safe is flying during COVID? 5 questions to ask before getting on a plane

Those choosing not to take a test when arriving from a country not on the government’s travel corridors list must continue to follow the self-isolation requirement of two weeks.

“Our new testing strategy will allow us to travel more freely, see loved ones and drive international business. By giving people the choice to test on Day 5, we are also supporting the travel industry as it continues to rebuild out of the pandemic,” Shapps said.

“The FTSE 250 had another good day, rising 0.9% with leisure stocks in demand including a 9% rise in TUI TUI, +15.85% and a 6% rise in Carnival CCL, +10.53%, with many households now hoping that foreign holidays will once again become a reality rather than a fantasy,” said Russ Mould, investment director at AJ Bell.

Test to Release was welcomed by the travel industry, which has been fighting for survival as travel disruption due to the COVID-19 pandemic continues to drag on profits.

Tim Alderslade, chief executive of industry body Airlines U.K., said the strategy was a “hugely welcome step that will begin the process of opening up international travel and restarting U.K. aviation.”

But he cautioned that a test at day five “does not get rid of quarantine,” and urged the government to move toward a pre-departure or domestic testing regime that can remove safely the need for self-isolation altogether, as quickly as possible.

“This is the only way we’re going to comprehensively reopen the market. But, with this announcement there is now light at the end of the tunnel not just for carriers and U.K. aviation but consumers looking to get away at Christmas and beyond.”

Meanwhile, the International Air Transport Association said it is in the final development phase of a digital health pass that will support the safe reopening of borders.

The IATA Travel Pass, will manage and verify the secure flow of necessary testing or vaccine information among governments, airlines, laboratories and travelers.

“The second key is the global information infrastructure needed to securely manage, share and verify test data matched with traveler identities in compliance with border-control requirements.”

Last week, American Airlines AAL, +9.29% and British Airways launched a coronavirus-testing trial in an effort to persuade the U.S. and U.K. governments that testing can restart international travel and remove the need for passengers to quarantine on arrival.

On Tuesday, the government also announced financial support for struggling airports in England and the ground handlers serving them.

The support, which starts in 2021, will address fixed costs and be equivalent to the business rates liabilities of each business, capped at up to £8 million per site, and subject to certain conditions.

From the archives (October 2020): Heathrow boss was hopeful of London-New York air bridge by Thanksgiving

Heathrow said in October that it has lost its position as Europe’s busiest airport for the first time, after being overtaken by Paris Charles de Gaulle Airport, following the unprecedented slump in global demand for air travel.

The airport said November is likely to be even worse. “Long-haul and critical markets for trade suffered the worst declines due to the Government’s debilitating quarantine requirements” it said in a statement on Nov. 11.

: Hundreds of Americans have jumped at the...