Ukrainian President Volodymyr Zelensky on Saturday praised the only survivor of a military plane crash as the death toll climbed to 26, after another cadet died and three more bodies were found. Zelensky went to the scene of the tragedy near the northeastern city of Kharkiv where an Antonov AN-26 transport plane carrying 20 air force cadets and seven officers crashed during a training flight on Friday evening.

"Ukraine has lost 26 worthy sons," Zelensky said on Facebook, referring to the cadets and officers of the Kharkiv National Air Force University. 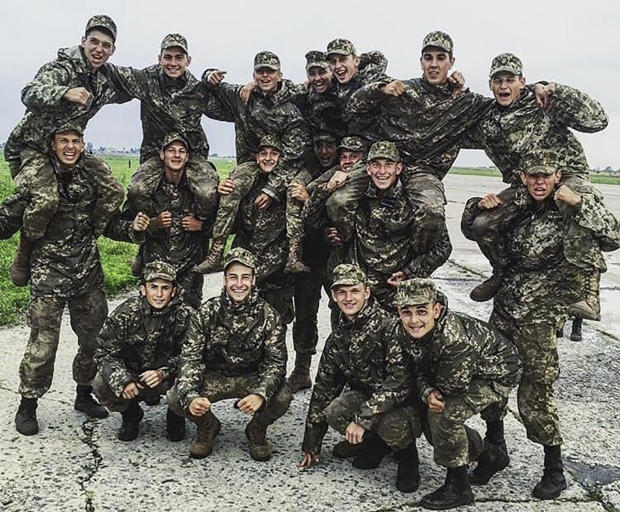 This undated photo provided by the Ukraine's Police on Saturday, Sept. 26, 2020 shows a group photo of cadets from the military aviation school killed in an AN-26 military plane crash.  / AP


"It is difficult to find words to express the pain of this loss," he said, declaring Saturday a day of mourning.

The plane burst into flames on landing near a highway more than one mile from the Chuguiv military air base.

An eyewitness told Reuters he had seen a man in flames running from the wreckage. "Another car stopped behind us. We took a fire extinguisher and ran with another driver to help him," he said.

On Saturday, the death toll rose after three more bodies were found under the charred remains of the plane and one of the two survivors died in hospital from extensive burns.

Zelensky visited the only remaining survivor in a military hospital in Kharkiv, posting a picture of the 20-year-old cadet lying in bed with a bandaged head and right arm.

He said the cadet, Vyacheslav Zolochevsky, "came to his senses near the wreckage of the AN-26."

"The plane was destroyed, there was fire, darkness and bodies all around. One of the guys was burning," he said on Facebook, adding that Zolochevsky rushed to try and save him.

The second cadet died in hospital, the Ukrainian president said, as he praised Zolochevsky for his "heroism."

"Ukraine is proud of you!" he said.

Doctors said that Zolochevsky suffered a concussion but his life was not in danger.

Most cadets onboard were believed to be between the ages of 19 and 22. One other cadet was not allowed on the flight.

Zelensky said the cause of the crash should be quickly established and called for an "objective" investigation.

Investigators were looking at several possible causes of the crash including technical malfunction, human error and poor aircraft maintenance. 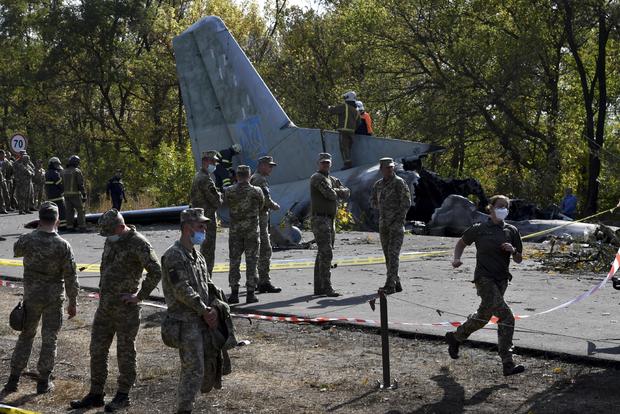 Ukrainian soldiers stand next to the scene where the AN-26 military plane crashed on Friday night, in the town of Chuguyiv close to Kharkiv, Ukraine, Saturday Sept. 26, 2020.  Andriy Andriyenko / AP


The SBU security service said the plane was performing a training flight but the cadets were not involved in piloting it.

Defense Minister Andriy Taran said "the plane likely caught the ground with its wing" and then burst into flames.

Citing preliminary information, the defense minister said that one of the sensors in the left engine had failed. He said the final conclusion would be made after authorities analyse the plane's black  boxes.

"Everything went according to plan: the plane was performing a training flight for cadets," he said.

He said the instructor was at the controls and cadets took turns to sit next to the pilot.

"According to preliminary findings, the cadets did not directly control the plane - the crew captain carried out all flights," the SBU said, according to the BBC.

Taran said the aircraft was made in 1977 but could be operated for three more years without undergoing repairs.

On Friday, the plane made six take-offs and five landings, he said. Officials said all flights by AN-26 aircraft would for now be suspended.

"We send our heartfelt condolences to the families and loved ones of the cadets, officers, and crew killed and injured in the An-26 plane crash," said the U.S. embassy in Ukraine.

Australia begins disposal of over 350 dead...

29 Celebrities I Always Forget Are Actually...