At first glance, the snow that's changed from white to bright pink in the Italian Alps seems like a stunning feat of nature. But scientists say it may actually be a warning sign of environmental trouble.

Algae are to thank — or blame — for the pink layer that currently coats the Presena Glacier in northern Italy. Scientists say it's not an uncommon phenomenon in the spring and summer, but they warn that it could become a problem if it starts occurring more frequently.

Biagio Di Mauro, of the Institute of Polar Sciences (ISP) at Italy's National Research Council, traveled to the glacier last week to investigate the mysterious algae. While the phenomenon is well-documented, "there is relatively little scientific literature on this phenomenon, which has the direct effect of accelerating the melting of snow and ice," the institute said.

Photos from the trek show a massive algae bloom, turning large swaths of the glacier from white to pink. 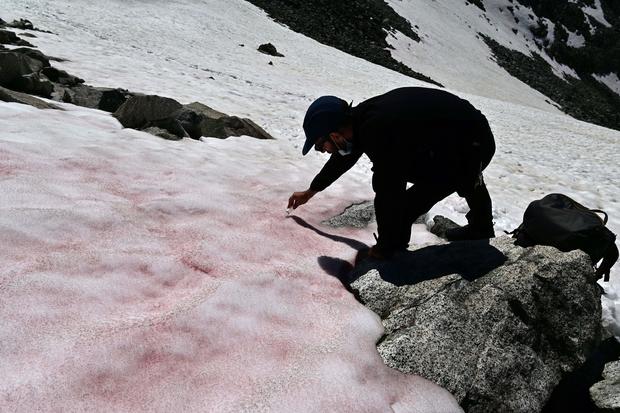 Biagio di Maio, a researcher at Italy's National Research Council, takes samples of pink colored snow on July 4, 2020 on the top of the Presena glacier near Pellizzano, Italy. MIGUEL MEDINA/AFP via Getty Images


Di Mauro said on Twitter that the algae was likely Chlamydomonas nivalis, a snow alga, not Ancylonema nordenskioeldi, a glacier alga. According to a 2018 study published in the journal Nature, snow algae productivity has implications for carbon dioxide in the atmosphere.

"The alga is not dangerous, it is a natural phenomenon that occurs during the spring and summer periods in the middle latitudes but also at the Poles," Di Mauro said in a press release.

The algae could accelerate melting in the already fragile region. Climate change, contributing to 2020's unseasonably warm temperatures and lack of snow, is exacerbating the issue.

Typically, ice reflects the majority of the sun's radiation, but algae darken the ice, causing a decrease in albedo, or reflectivity. This causes the snow to absorb more heat and melt more quickly.

"Everything that darkens the snow causes it to melt because it accelerates the absorption of radiation," said Di Mauro.

In order to flourish, the organisms need an available supply of water. So, as the ice melts, even more algae will appear.

In May, Antarctica saw green snow, also caused by microscopic algae. At the time, scientists said that as the planet warms and more of Antarctica's snow melts, the algae will only continue to spread. 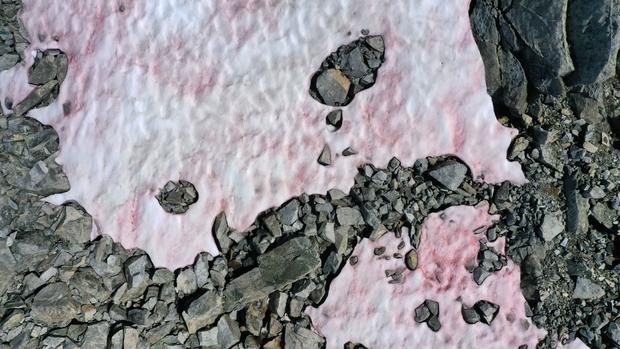 The joker is wild

New Zealand "beat the virus" but what happened next?
3

Gallup: Majority of black Americans want police staffing levels to remain where they are
4